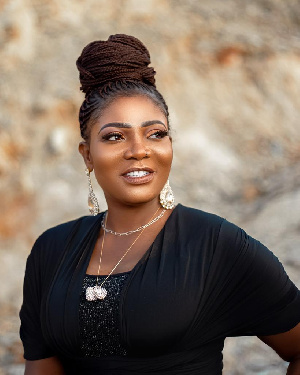 Florence Obinim, one of Ghana’s seasoned gospel musicians who has been out of the music scene for a couple of years, is back with a new single titled ‘Adekye3 Mu Nsem’ to register her presence on the music scene again.

The ‘Amazing Love’ hitmaker has made a big comeback to the music industry after she took a long timeout to attend to some private businesses in and outside the country.

‘Adekye3 Mu Nsem’ composed and arranged by Florence herself was produced by Dan Baxy with support from her management team.

With a focus on the Omnipotent power of Christ, the new song assures Christians that there’s always light at the end of the tunnel. According to Florence Obinim the song Adekye3 Mu Nsem was composed to educate people about God’s love for mankind.

The song is also directed at motivating and inspiring the youth to build their confidence to change the world around them positively.

According to BEATWAVES the song, which is yet to receive massive airplay on all the local radio stations in the country, is prophetic and seeks to change the pattern of gospel music in the country.

Florence Obinim explained that though she’s been silent for some time now, she hasn’t abandoned her chosen musical career as people are speculating, adding that her love for gospel music has been a part of her, and that “I will continue to use gospel music as a tool to get people closer to God.”

She indicated that her presence in the gospel music industry has given her the opportunity to use music to educate people about the teachings of Christ Jesus.

Her songs mainly project the faithfulness of God and the reason why Ghanaians should give thanks to Him as long as they live on this earth.

Florence Obinim feels it is time for her to make her inspirations felt on the music scene, and she hopes her new song would break barriers just like her previous releases.

“The song highlights the ways of God in the lives of those who have placed their faith in him. Sometimes we eagerly seek to have something from the Lord in prayer and to answer our requests, He takes us through a series of tests to prepare us for his great blessings,” she pointed out.

She promises her fans more ‘scintillating’ music from her camp, as she is here for good.