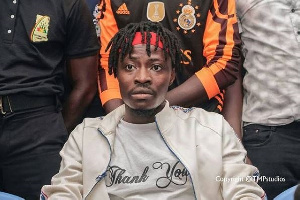 Fancy Gadam has refuted rumours that he sacrificed some 16 fans who died in two major accidents in the Nothern region for rituals.

Discarding claims that he is a ritualist, Fancy Gadam said those two accidents were simply unexpected.

“The reality is that I just organized a show and an accident happened. I’m not into money rituals or any rituals, I believe in Allah and I pray five times daily. I just give thanks to the Almighty Allah for whatever that happened to me and I’m moving forward,” he told the host.

It can be recalled that exactly three years ago in 2018, eight people lost their lives after ecstatic fans of Fancy Gadam and Nigerian artiste, Patoranking were involved in an accident in Tamale.

It was reported that the accident happened when Fancy Gadam’s convoy collided with a truck after an attempt to give his Nigerian counterpart a rousing welcome to his stronghold.

This followed a similar incident in July 2016, during Eid-Ul-Fitr where nine persons died out of a stampede.

The deceased persons were trapped on the walkway of the exit gate of the Asawase Community center when a false alarm was raised that Fancy Gadam was billed to perform at an event at the venue.

VIDEO: Amerado is a dope rapper -Sarkodie praises him amid beef with Obibini