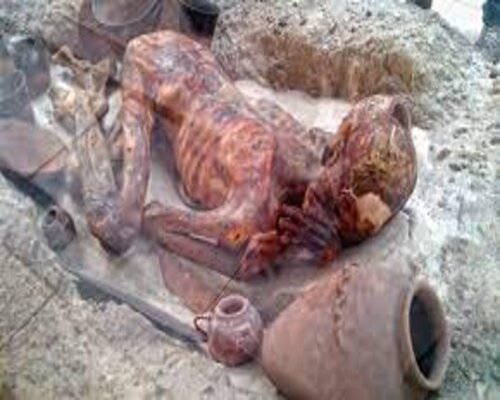 A man was arrested in Fatehpur Sikri near Agra on Sunday over suspicions that he had sex with a woman’s body after dragging it out of her grave, police said.

In the macabre incident, the 50-year-old woman’s body was found dug out of her grave at the Lal Darwaza graveyard on Saturday. The body bore signs of sexual assault. While police earlier said dogs might have been responsible for the incident, villagers said some “maniac” had pulled out the body of the woman who died on Friday, and had sex with her. “Her legs were found turned towards her head and shoulders,” the villagers said.

Police suggested a post-mortem examination of the body, but relatives and family members chose to give her a second burial. The woman hailed from Sadabad in Hathras district and was married to a man in Fatehpur Sikri.

Police in Fatehpur Sikri said a 40-year-old man named Rajendra was arrested and he has confessed to the crime. He told police that while the body was being buried, he had already made up his mind to have sex with it. At night after consuming liquor, he dug up the grave and committed the crime. Locals said he was an alcoholic, unmarried and even his family members were sick of him.

7-year-old boy sets himself on fire