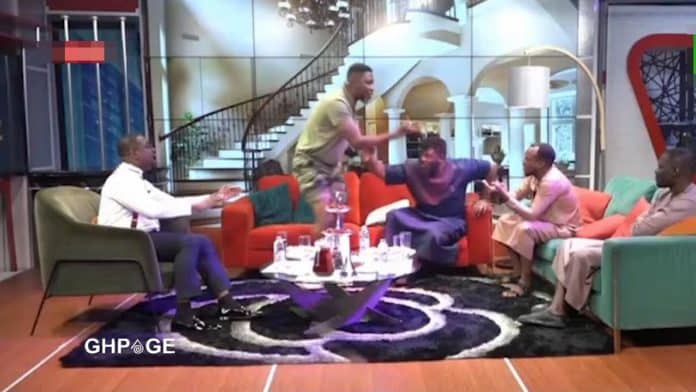 There was nearly a brawl and exchange of physical blows at the studios of UTV during yesterday 7th August 2021’s episode of United Showbiz hosted by Abeiku Santana for Nana Ama Mcbrown.

As already published by GhPage, Nana Amma Mcbrown is out of the country for another surgery resulting from a domestic accident and Abeiku Santana of Okay FM took charge of the show.

However, he lost control of the show, and two of the panelists, A-Plus and Halifax Ansah Addo clashed which nearly got physical. A-Plus who was most angry even got up at a point to pounce on Halifax.

Harsh words and insults were traded between the two on live TV. Even the ‘F word’ was used by A-Plus at a point but he was made to apologize in the end.

The beef started when Halifax asked A-Plus why he did not attend the much-publicized #FixTheCountry demonstration.

Halifax questioned if it was because A-Plus once stated he was not interested in the demo which he described as ‘jogging exercise’.

This got A-Plus very angry which made him start throwing insults at Halifax which he equally responded in kind.

Watch the clash between Halifax and A-Plus below

Related Topics:A plusBESTHalifaxLIVENEARLYonTV
Up Next