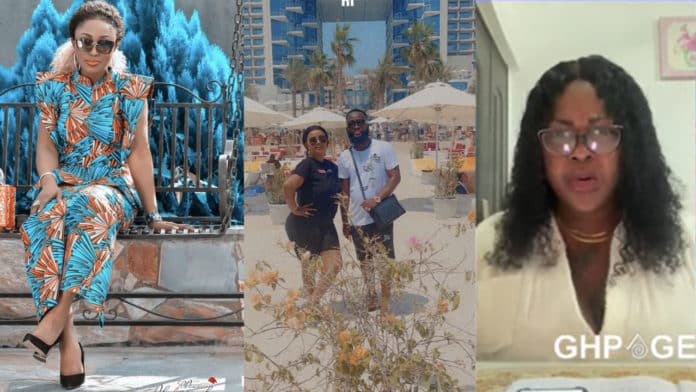 Kumawood actress Joyce Boakye has revealed that everything is not rosy in the marriage of the celebrated and award-winning actress Nana Ama Mcbrown as she always makes it look.

According to Onua TV presenter Mona Gucci, after she was humiliated by Nana Ama Mcbrown and her panelist some weeks ago on her United Showbiz show, she got a message from Joyce Boakye asking her to let things slide.

She explained that she was hurt and wanted to take actions against the actress turned presenter until Joyce Boakye contacted her to beg for forgiveness on behalf of Nana Ama Mcbrown.

Mona Gucci in a live video on social media stated that Joyce Boakye introduced herself as Kumawood actress and a close friend to Nana Ama Mcbrown and since she knew the latter is also from the Kumawood industry she believed her.

She revealed that in their conversation, Joyce Boakye bluntly told her that Nana Ama is not in a good mood as she is always being abused by her husband at home before she comes to sit on TV to host the show.

The Onua presenter added that due to the fact that she has never been to Kumasi before in her life she believed Joyce Boakye’s allegations.

Mona showed screenshot and read messages she claimed to have received from Joyce Boakye.

Mona Gucci dared Joyce Boakye to come out and deny the allegations she has levelled against her and see the other profs she has.

WATCH: ‘God will save me’ – Akuapem Poloo responds to Eagle Prophet’s gang-rape prophecy

VIDEO: I’ll be disappointed in Bawumia if… – Fancy Gadam