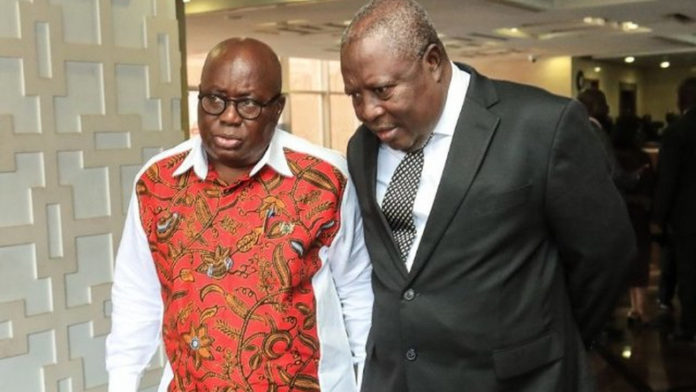 President Nana Akufo-Addo says despite the unfortunate events that led to the exit of Martin Amidu as Special Prosecutor, he does not regret appointing him.

The former Attorney General, Mr Amidu was appointed to lead the fight against corruption for seven years, but nearly three years after he had been sworn into office, the Special Prosecutor (SP), resigned.

Mr Amidu cited what he described as “political interference in the independence of his office” as the main reason for his decision to leave office.

Additionally, he said, his office was given inadequate staff who were mostly on secondment, a situation that made it nearly impossible for his outfit to effectively carry out its functions.

On the 4th floor of the Jubilee House, President Akufo-Addo sworn into office 43-year-old legal practitioner, Kissi Agyabeng, for a seven-year mandate as Special Prosecutor.

Describing him as highly qualified, the President charged him to fight corruption independently.

The President also assured government will increase budgetary support to other anti-corruption institution to help with the fight against the canker.

According to his profile on the University of Ghana School Of Law website, Mr Agyabeng has been a lecturer since October 2006, teaching and researching Criminal Law, International Humanitarian Law, International Law, Corporate Law and Legal Research and Writing.

He was awarded the Bentsi-Enchill Prize for Best Graduating Student of the University Of Ghana School Of Law in 2001.

He proceeded to the Ghana School of Law and was called to the Ghana Bar in October 2003, earning the E.N. Sowah Memorial Prize for Best Student in Family Law.

Since then, he has successfully argued numerous cases before the superior courts of Ghana and participated in several international arbitration hearings.

He is also an associate at the African Centre for Cyber Law and Cyber Crime Prevention and the National Moot Court Coordinator for the Commonwealth Moot Court Competition on International Criminal Justice.

He has also served as the Vice-Chairman of the Appeals Committee of the Ghana Football Association.

About the Office of the special Prosecutor

The office serves as an independent investigating and prosecution body to make inquiries into corruption, bribery, or other criminal cases at the national level whether they be in public or private sector.