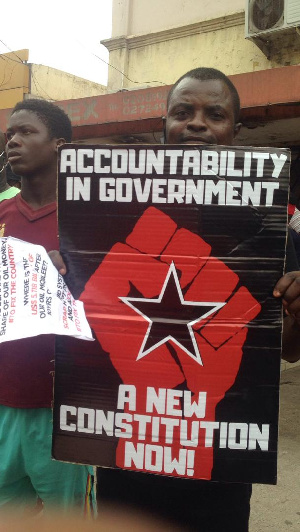 •The #FixTheCountry demonstration was held on Wednesday, August 4, 2021

•The protest was covered extensively by both local and international media

•The media highlighted the issues raised by the demonstrators

After months back and forth with Ghana Police Service, the #FixTheCountry campaigners on Wednesday got their wish of pouring out on the streets to protest against poor governance and other issues which in their wisdom is crippling the country.

The turnout contrary to what critics expected was huge with Ghanaians in their thousands, mostly youth trekking from Kwame Nkrumah Circle to the Independence Square where they climaxed it with though-provoking speeches, drumming home their demand of the political class to be up and doing.

The protest which has been ‘cooking’ since May courted international attention with foreign media covering the non-partisan protest.

The Bloomberg report on the massive and hugely successful demonstration was titled “Ghanaians demonstrate against rising unemployment and costs”.

The report by Yinka Ibukun states that “Ghanaians kicked off a series of planned protests aimed at pressuring President Nana Akufo-Addo’s administration to do more to create jobs for the youth, improve health-care and education standards, and bring down living costs”.

The pidgin version of the BBC website also reported the demonstration with extensive coverage of compelling videos and photos.

The news, article written in pidgin talks about the number of protestors, adherence to Covid-19 protocols and the concerns raised.

The Aljazeera report like the others shed light on the various inscriptions on the placards and highlighted the economic issues that fueled the demonstration.

“Lead by social media activists, the #FixTheCountry protest on Twitter has been highlighting economic problems and government management.

“If the political authorities will not fix this country, we want to tell them that we are capable of destroying their career because we brought them to power,” said Fatima Mensah, a 35-year-old activist.

On DW, the protest was the top story of the African Link show which focuses on major issues on the African continent.

They spoke to some of the protestors and gave a brief about the economic situation in the country as well as the demands by the protestors.

“Dressed in red and black and chanting patriotic songs, protesters waved placards declaring “Corruption breeds poverty” and “Fix our education system now” as they marched in the city centre.

“Wednesday’s rally was the most recent anti-government protest since March, when a top court dismissed the main opposition party’s challenge to Akufo-Addo’s re-election late last year”.