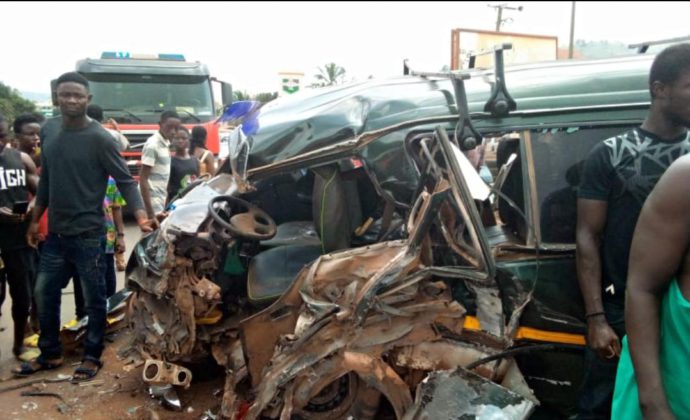 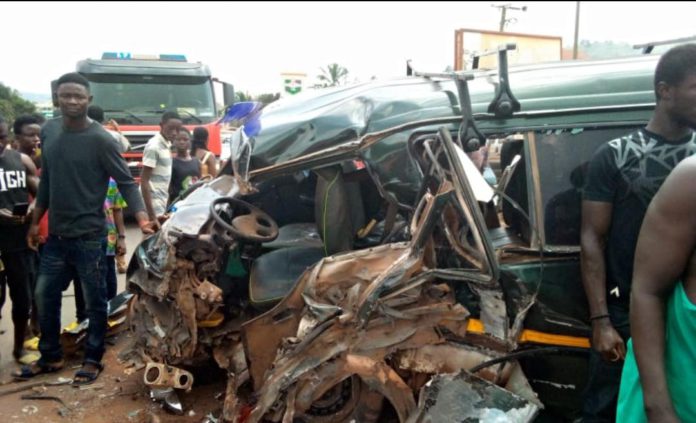 An accident that occurred at Brahabebome Rab Junction has left a driver dead and 12 others injured.

The crash that happened in the early hours of Monday, August 2 was caused by speeding and mechanical malfunction of one of the cars.

According to some passengers traveling in the Tata Bus, their driver spotted the Hyundai Grace minibus, which was moving speedily on the stretch.

However, all attempts to veer off the road proved futile, making the Hyundai rammed into the rear of the Tata Bus.

Some passengers in the Hyundai car told Adom News that their driver suffered serious injuries to his head, and died on the spot.

Ten persons seated on the front side sustained various degrees of injuries with two persons in the Tata Bus surviving with minor injuries.

A family of six, were however spared the ordeal.

Of the twelve injured, a pregnant woman, as well as another passenger with life-threatening injuries have been transferred to the Komfo Anokye Teaching Hospital.

The remaining are receiving treatment at the Obuasi Government Hospital.

Confirming the accident, Corporal Winfred Acheampong, CID, Obuasi Divisional MTTD said the driver of the Hundai Grace has been identified as a spare.

He added that the body has been deposited at the Komfo Anokye Teaching Hospital morgue.

PHOTOS: Mother and child found dead in a nearby bush at Loho