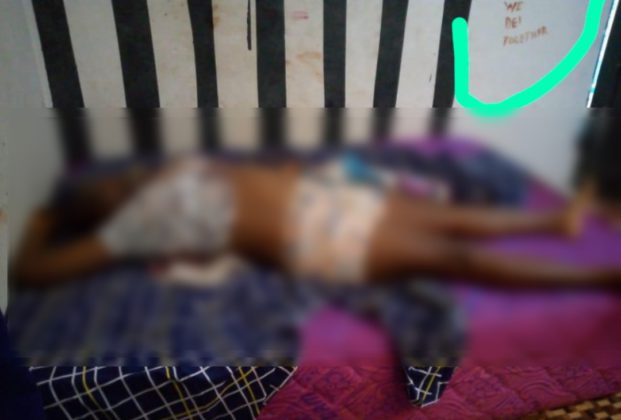 A note, believed to be an epic murder-suicide announcement, has been found in the room of Damongo Police Constable who was stabbed to death.

The body of P/W constable Sandra Asiedu of the Savannah Regional Headquarters was discovered by some police personnel, Monday, August 2 after they received a signal of her demise through a friend.

She was found lying in a prone position, with visible stab wounds and blood stains all over her chest and neck.

A kitchen knife found on the floor close to the bed was not the only object of interest; a note was left on the wall by the alleged killer, her lover.

The note, written in a red fluid, read “we love together we die together.”

It was written slightly above the bed on which the corpse lay, and directly behind the door, as though he was hoping it would be discovered.

Meanwhile, the police have confirmed the murder in a press statement, but are tight-lipped as they await a signal from the Police Headquarters before briefing the media.

The suspect is currently at large while the body has been conveyed to the West Gonja district hospital awaiting autopsy.

PHOTOS: Mother and child found dead in a nearby bush at Loho