American rapper, Wale was lambasted by a social media user for hyping Sarkodie’s ‘no pressure’ album

•His comments have drawn several criticisms from social media

A Sark Nation fan has lambasted American rapper and songwriter, Wale, for no clear reason.

The rapper who took to Twitter to hype Sarkodie’s upcoming ‘No Pressure’ album, was met with a hostile response from a social media user.

Wale shared a fan’s tweet in which he was acknowledged for hyping and acknowledging Sarkodie’s album.

The tweet from the fan read, “Big shout out to Wale for really hyping and giving a spice to the ‘No Pressure’ album,” with the retweet from Wale captioned, “Let’s go Ghana.”

But shortly after, a social media user believed to be Sarkodie’s fan, verbally attacked the American rapper, saying, “Sarkodie gave you a career.”

In his response, Wale said, “That’s how people talk with ya’ll who collaborate with brothers? Smh.”

Following that, this particular Sark fan has come under heavy backlash for passing such a comment, which many have described as ‘uncalled for.’

Meanwhile, the American rapper is one out of the many international artistes featured on Sarkodie’s ‘No pressure’ album.

The project, which is Sarkodie‘s 6th studio album, was initially scheduled for release on July 9, 2021, but has been postponed to July 30 2021. 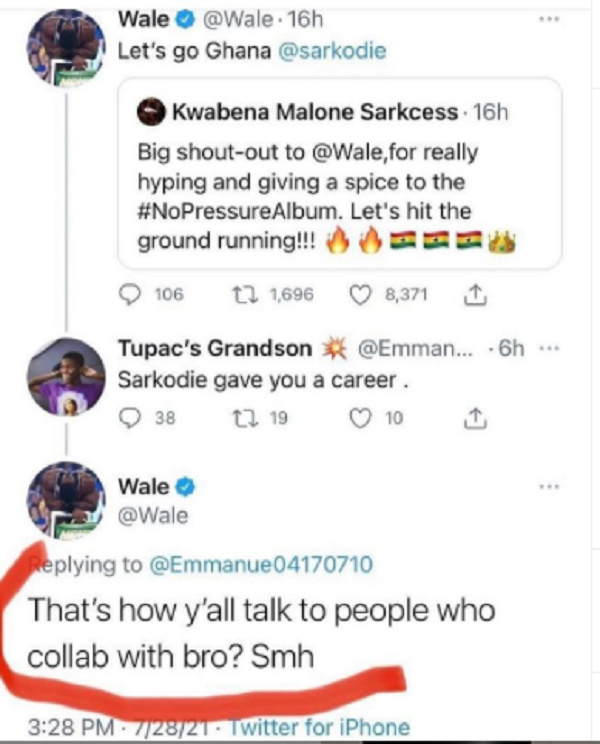 Source: www.ghanaweb.com
Related Topics:AMERICABLASTSfanPOPULARrapperSARK
Up Next

No susu for hospitals, killer roads but for Cathedral ‘they wanted’ – Lydia Forson jabs