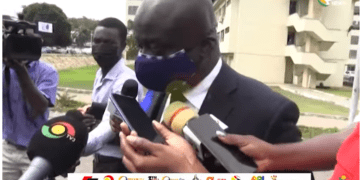 Mr Kwasi Afrifa, the lawyer who made the five million dollars bribery allegation against the Chief Justice Anin Yeboah has been charged by the General Legal Council (GLC) with 9 counts of Misconduct.

His charges read “You are hereby notified that following preliminary inquiry held by the Disciplinary Committee of the General Legal Council, a prima facie case of misconduct has been established against you. You are hereby being charged for the following misconduct.

“That you, having been informed of an alleged unethical conduct in the office of the Chief Justice by your former client, Ogyeedom Obranu Kwasi Atta VI, the Complainant herein, failed to protect the sanctity and integrity of the legal profession by failing to disclose the allegation of bribery against the Chief Justice of the Republic of Ghana to the Disciplinary Committee of the Judicial Council or any other statutory body for an inquiry.

“That you, in a preliminary inquiry before the Disciplinary Committee of the General Legal Council voluntarily admitted that you failed to issue any receipts to your former client, Ogyeedom Obranu Kwasi Atta VI for the payment of legal fees thereby committing a professional misconduct.

“That you, in a conversation with your former client, Ogyeedom Obranu Kwasi Atta VI about an alleged judicial manipulation by the Chief Justice of the Republic of Ghana, omitted to defend the reputation of the legal profession, and rather facilitated the commission of the alleged bribery offence by refunding to the Complainant legal fees you were legally and duly entitled to thereby failing to uphold the dignity and high standing of the legal profession.”

Mr Akwasi Afrifa made the allegations against the Chief Justice in response to a petition filed at the General Legal Council (GLC) by Ogyeedom Obranu Kwesi Atta IV.

The Chief Justice denied the allegations and reported lawyer Afrifa to the Criminal Investigations Department (CID) of the Ghana Police Service.

He also reported him to the Disciplinary Committee of the GLC.

According to the Chef Justice, he does not “know the plaintiff and has not met or seen him anywhere, except in the court room when he rises to announce his name when his case is called”.

In his letter to the CID signed by the Judicial Secretary, Justice Cynthia Pamela Addo, Chief Justice Anin Yeboah “asserts that he has had no personal interaction either with the plaintiff or his lawyer on this matter or in any other matter”.

“His Lordship further asserts that he has not demanded or received any money from any person to influence any decision in this matter or any other matter.”

How a boy’s ‘Our Day’ list sparked social media debate