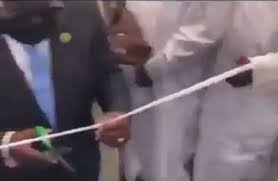 • In this photo, the president is seen about to perform an official tape-cutting ceremony

• As if the president’s sight had failed him, he made five attempts before successfully cutting through the tape with the scissors in hand

The president, Nana Addo Dankwa Akufo-Addo, has been spotted in what appears to be an embarrassing, or, worrying video, depending largely on how you look at it.

The video, which has been established to have been captured during the commissioning of the Ghana National Mosque at Kanda on Friday, July 16, 2021, has the president, spotting his trademark suit and tie, attempting to cut the tape to open what is now the largest mosque in West Africa.

The president, Nana Addo Dankwa Akufo-Addois seen turning to the tape in front of him, with a scissors in hands, and prepares to cut through it.

Once. Twice. Thrice. Four times, and then the fifth time. That was how many times the president tried to cut the tape although his left hand was firmly holding one side of the tape, in order to make it easy for him to cut through it.

The 18 seconds-long video was seen on social media and has since been receiving a lot of varied reactions.

But, the most predominant question has been, “Was there something peculiarly wrong with the president’s sight?”

Godwin Ako Gunn, the Deputy National Communications Officer of the National Democratic Congress, wrote, “I have no problem if the president has lost his sight or has gone through a surgery and regaining his sight. Things happen to us differently as we age or grow.”

Source: www.ghanaweb.com
Related Topics:addoAKUFOcitMOMENTribbonstruggledTO
Up Next