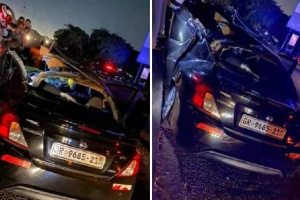 Isaac Parker Yeboah, who was killed in an accident on the Tema Harbour dual carriageway on Wednesday, July 7, was not registered with the Uber ride-hailing service network.

The 28-year old, who was driving a Nissan Versa Saloon car, with registration number GR 9685-21, according to the Police, crashed into a moving construction vehicle, which had extended into his lane, in the night.

In an earlier report on the accident, the Police said Yeboah, who had two passengers on board his vehicle, was working with Uber.

This, they explained, was based on the information given by his family member.

However, Ivy Shirinda, a Conversation Architect at JNPR, Uber’s PR Agency, has told the GNA that Yeboah was not working for their network.

“At Uber the safety of all drivers and riders is our main priority. From the information provided such as, the vehicle make, and registration number, Uber’s Incident Response team looked into their records and found that there is no active registered under these details,” Ms Shirinda wrote.

This information was later corroborated by Ms Anna Mensah, one of the passengers involved in the accident.

She told the GNA that she requested the services of another ride-hailing company, but not Uber.

According to the Tema Regional Motor Transport and Traffic Directorate, Yeboah was driving in the inner lane of the carriageway from the Tema Motorway intersection towards the Valco roundabout.

However, on reaching a section of the road opposite the Tema Technical Institute, it ran into the moving heavy duty vehicle, with registration number GT 9258-18, which had extended its bull beyond the central reserve pavement into the lane of the saloon car.

The impact ripped off the roof of the car, killing Yeboah instantly.

The passengers were rushed to the hospital but have since been treated and discharged.