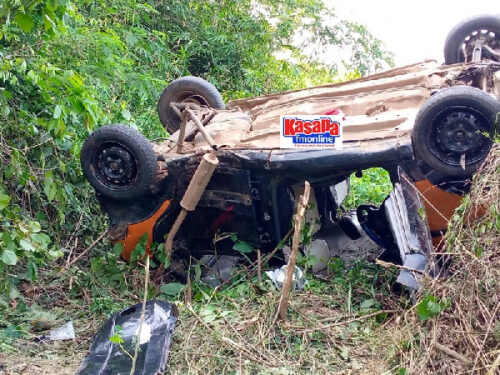 At least four people have died, while scores have been injured in road accidents in the Ashanti Region, the police and local media reported Friday.

The first incident was reported at about 12pm, at Afoakwa Junction on the Kumasi-Obuasi stretch, reports an eyewitness.

The taxi driver and one passenger were confirmed dead on the spot. Another female passenger also died upon arrival at the St. Peter’s Catholic Hospital.

A medical doctor at the hospital, Dr Adai Aboagye said: “We received five casualties. One person died on the spot and so was brought in dead. The other person, a woman over the age of 60, also passed away at the emergency unit. The other casualties are quite stable and they are being monitored”.

Other surviving victims had also been sent to other health facilities for treatment.

Police at Jacobu confirmed the three deaths and pegged the number of injuries to 10.

In another development, a woman also died while at least 20 others are receiving treatment at various health facilities including the Ejura Government Hospital.

The incident occurred at about 5:30 p.m, Friday, at Teacherkrom on the Aframso-Sekyedumase road, a police incident report sighted by dailymailgh.com read.

A driver in charge of an unregistered Toyota Highlander vehicle with a DV plated number DV 7177-A 2020 with four other occupants onboard veered off his lane and collided head-on with an oncoming Nissan Caravan bus with registration number AS 878 – 21 which carried 15 passengers.

“A woman was confirmed dead”, the police at Ejura said. “The rest sustained various degrees of injury and are currently at the Ejura Government Hospital”.

The deceased was yet to be identified at the time of filing this report.

Her remains has been deposited at the Hospital’s morgue for preservation, identification, and autopsy.

“Both suspect drivers are on admission”, the police said adding that investigations have started.

Unexpected clash between Yenyeya and Shaanxi goes to High Court