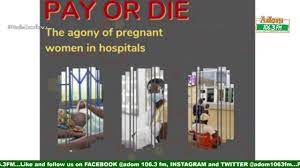 Ills at the Taifa Polyclinic in Accra have been exposed in a follow-up story after the Pay or Die documentary that uncovered rot in service delivery to pregnant women in Ghana’s public hospitals.

It has emerged that expectant mothers, who are supposed to benefit from the government’s free Maternal Healthcare Programme under the National Health Insurance Authority (NHIA) policy, are made to pay big monies before delivery.

The investigation uncovered that the young lady went through cesarean section on the blind side of her family members though they were present at the time of birth.

“We knew she had been taken to the theatre but were not aware of the cesarean section until we were handed a GHS 2,034 bill to pay after the delivery,” her 75-year-old caretaker told Corruption Watch.

Following their inability to settle the bill, the mother, among other things, was asked to move from the bed to a plastic chair to make way for another patient.

Though the health workers admitted the new mother was experiencing Postpartum Depression, which occurs after childbirth and needed rest, they were not going to allow her to leave until she settled the bill.

A situation that forced the family to go on a borrowing spree over fear of losing the mother or the baby.

Watch the video attached for more:

Here are the natural ways to tighten the vagina