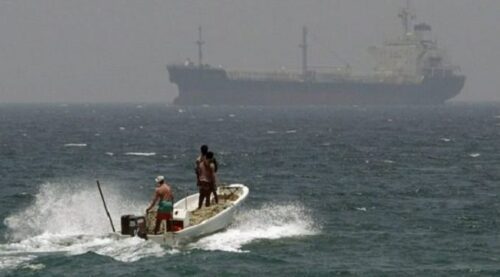 New reports have said that another set of four Ghanaians aboard a fishing vessel in the Gulf of Guinea have been abducted by pirates who are on rampage in the region.

In May of this year, all five members of a crew onboard a Ghanaian-registered fishing vessel, Atlantic Princess, were captured by pirates off the Atlantic.

They were let go after an undisclosed amount was paid from a negotiated $1 million ransom demand by the kidnappers, graphic.com.gh has reported.

It said further that another set of four Koreans from a second attack are still being held captive in Nigeria.

Like the earlier attack, these kidnappers are also demanding a $1 million ransom before the abductees, whose vessel is the Iris S, are released.

To lead the negotiations, a team of British consultants are said to be in Nigeria at the moment to try to reach an agreement for the release of the captured, the report added.

Nicholas Papafio (not real name), a manager of Atlantic Princess, speaking to the Daily Graphic, said that the pirates, believed to be Nigerians who were wielding AK47 rifles, were seven in number.

He added that the kidnappers shot into the Atlantic Princess, damaging it, after which some eight pirates abducted the vessel’s Korean captain, three Chinese and a Russian.

“The vessel was said to have been approached and fired upon by a skiff boat, small fast boat, with eight armed pirates on board. The vessel then stopped and seven armed pirates with AK 47 boarded the vessel,” he explained.

He continued that, “All mariners are cautioned that there is a high possibility of pirates mothership in the form of a rusty looking small size tanker, operating in support of pirates within the general area deep offshore Tema and stretching further East into Togo, Benin, and Nigeria,” Papafio warned.
The Iris S’s remaining 31 crew members were however unharmed and were escorted back to port by a Ghana Navy patrol boat, the report said.