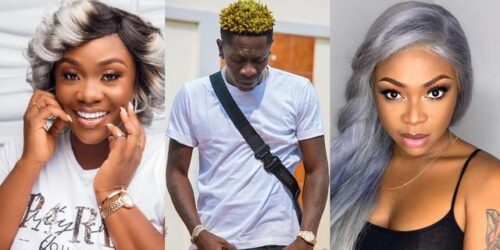 Magluv who is a childhood of friend of Shatta Wale is now alleging that the Kumawood actress had an affair with the dancehall star at the back of Michy despite claiming to be her friend and adviser.

“You Emelia Brobbey, when I met you with Michelle in Kumasi, because you wanted to link to her another man, you came to our table to say that “don’t put all your eggs in one basket” and now you have to come to sit on TV to advise her after her relationship failed,” Magluv said.

Magluv, who is the CEO behind Shatta Wale’s Reign clothing line, has also been fingered as one of the reasons why Shatta lovers had to split. However, she has been denying that and now spilling the beans on some of the things that caused Shatta and Michy’s breakup.

“Because you had a discussion with her and she told you that a girl (me) is responsible for her breakup, you intentionally brought her on your show to advise her so that I can be condemned but you Emelia Brobbey, you didn’t tell that she shouldn’t take you as a friend,” she said.

Magluv continued that “because you the d*ck the girl (Michy) was fighting over, you came to chop. Emelia Brobbey, have you told Michy that you have come to sleep with Bra Nii (Shatta Wale) at the time when she was dating her“.

According to Magluv who has been dropping explosive secrets about Michy, Emelia Brobbey does not even have the moral right to invite Michy on her show. “That is how fake you people are in Ghana,” she said.

“I have Shatta Wale’s phone here, I have everything on it” she added whilst bemoaning the Kumawood actress for being a wolf in sheep’s clothing. She also claimed that the actress again had an affair with an ex-boyfriend of Michy. Hear more from her in the video below.