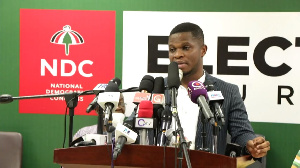 The National Communications Officer of the largest opposition National Democratic Congress (NDC) says first lady Rebecca Akufo-Addo does not deserve any applauds for refunding allowances she received from the state.

Sammy Gyamfi maintained that the first lady’s move was compelled after a public disagreement of the monies allocated to be paid to her according to the recommendations of the Prof. Ntiamoa-Baidu Committee, as approved by Parliament.

He said on NEAT FM’s morning show ‘Ghana Montie’ that Madam Rebecca Akufo-Addo was embarrassed by the public outburst – hence, the need to refund the money.

“The agreement was that all former first ladies who were facing some challenges were going to receive some allowance every three months. The Rawlings government did for Fathia (Nkrumah), Busia’s wife and other former first ladies.

“They also did it for sitting spouses that every three months, they’ll be given some allowances. The money was not huge. In fact, former first lady Lordina Mahama took GH¢8,000 every three months. The allowance was not the only thing the country did for them, they were given offices for their charity works and other activities. Government paid for the operation of their offices and gave them cars,” he added.

In a statement dated 12th July 2021, the 1st Lady described the “extremely negative opinions” from critics which are seeking to portray her as a “self-serving and self-centered woman” as “distasteful”.

In view of this, she “in consultation with the President of the Republic, has decided to refund all monies paid to her as allowances from the date of the President’s assumption of office, i.e., from January 2017 to date, amounting to GH¢899,097.84.”

“She is doing this as a purely personal decision, without prejudice to the rights of others, and not to undermine the propriety of the process undertaken by Parliament,” the statement added.

Source: peacefmonline.com
Related Topics:FIRSTHERLADYMONEYrefundsshamefully
Up Next

Rebecca Akufo-Addo will put her husband into trouble – Asiedu Nketia