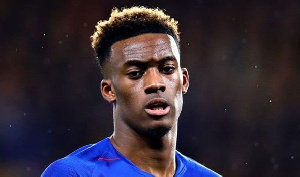 Unconfirmed reports indicate that Chelsea winger Callum Hudson-Odoi has decided to ditch the English national team and play for Ghana.

Multiple sports news outlets report that the son of an Accra Hearts of Oak legend has opted to play for the Black Stars at the expense of the Three Lions, a side that has handed him a handful appearances.

This sudden change of heart is due to the racist treatment meted out to the three black players who missed their spot kicks in the final match of 2020 Euros against Italy last Sunday.

Bukayo Saka, Jadon Sancho and Marcus Rashford were the subjects of racist posts by some English football fans.

Ghana, it will be recalled made overtures to Hudson-Odoi when he visited the country for his summer holidays in June.

The Sports Minister and President of the Ghana Football Association held a closed-door meeting with Hudson-Odoi who according Angel FM requested for time to make the decision.

In a recent interview, former Aston Villa player, George Boateng who picked the Netherlands over Ghana advised Hudson-Odoi to pick a country that gives him the best platform for his national team career.

“My advice would be that if you don’t see a future there [England] for you to play regular football, [then consider Ghana] because let’s not make a mistake here, Hudson-Odoi is an outstanding world-class footballer,” Boateng, who was born in Ghana, but played international football for the Netherlands, told Citi Sports.

“He is only going to get better and it will be a shame if he only ends up having five or six caps for England and doesn’t make a final tournament like a World Cup or European Championship ever in his career.

“But the possibility of representing Ghana and playing at the World Cup stage in a team with top-class players and if he plays for Ghana, it will send out a message to many other players, who would want to play for Ghana.”

The Champions League winner has been capped three times by England which makes him eligible to play for Ghana.

Source: www.ghanaweb.com
Related Topics:GhanaNATIONALITYodoiSWITCHTO
Up Next

I left Medeama with pains, not because of money – Samuel Boadu