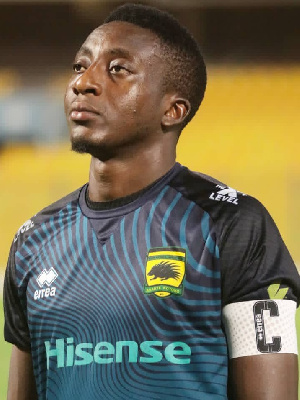 According to Kickgh.com, Felix Annan, Abdul Ganiyu and Wahab Adams are all set to leave the club.

Naby Keita and Augustine Okrah are all part of the players that will part ways with the club.

Annan, who is the captain of the side has endured a torrid season at the club with his contract set to expire at the end of the season.

The 26-year-old joined the Porcupine Warriors from West African Football Academy in 2011.

He rose to become the first-choice goalkeeper of the club but was relegated to the bench following the appointment of Maxwell Konadu and has not been able to reclaim his position under Mariano Barreto.

Barreto seems to have settled on Razak Abalora and Kwame Baah as his first and choice goalkeepers.

Annan was named the club’s captain in 2018 following the exit of Amos Frimpong. He was member of the Black Stars team that represented Ghana at the 2019 AFCON tournament in Egypt.

Striker Naby Keita is also expected to leave the club following his uninspiring performance at the club since his acquisition in October 2018.

Keita has been struggling for a place in the team under the club’s head coach Mariano Barreto with just a game to end the season.

Defender Wahab Adams is also expected to leave the club at the end of the season.

The management of Kotoko have decided not to renew the contract of former Aduana Stars defender.

Adams is one of the players at the club who was missed out in most match-day squad list will not be considered to be part of Asante Kotoko‘s campaign next season.

Winger Augustine Okrah who had an incredible campaign earlier this season has decided not to extend his stay at the club after this term.

His contract with Asante Kotoko will be expiring in December.

He has seen less playing time at the club under Mariano Barreto.

Finally, one player who has been kingpin at the backline of the club, Ismail Abdul Ganiyu is also on his way out of the club.

The lanky central defender will become a free player at the end of this month.

Abdul Ganiyu and his representative have kicked against the club’s contract extension offer following amid interest from three European clubs.

He is touted as one of the highly-rated guardsmen in the local scene. His stellar performance in the Ghana Premier League has earned him a place in the senior national team of Ghana.

Asante Kotoko will host Elmina Sharks in their final game of the season at the Obuasi Len Clay Stadium on Sunday.

I left Medeama with pains, not because of money – Samuel Boadu

From Asokwa to Accra, the rise of Hearts of Oak coach Samuel Boadu