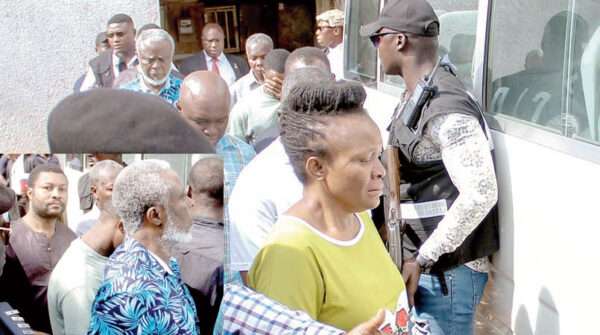 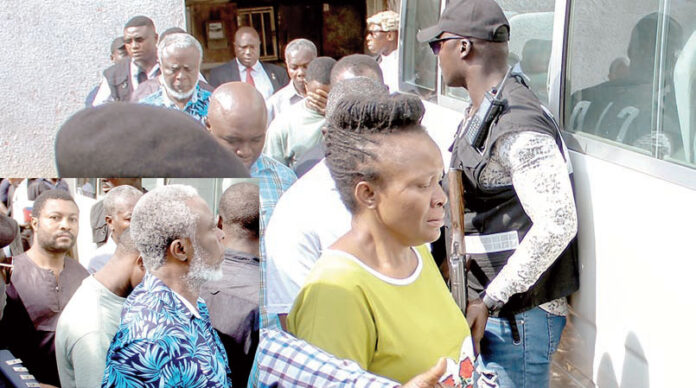 The only female of the 10 accused persons standing trial for allegedly plotting a coup  Warrant Officer (WO II) Esther Saan Dekuwine has been accused by the military of making overtures to escape from lawful custody.

In her bid to escape, she was said to have made advances to seduce a civilian who’s an employee of the military in the process.

This revelation was made known to a three-member panel of the High Court during further Cross-Examination of Second Prosecution Witness, Major General Nicholas Peter Andoh, Chief of Staff, General Headquarters of the Ghana Armed Forces by defence lawyers.

The court presided over by Justice Afia Serwah Asare-Botwe has Justice Hafisata Amaleboba and Justice Anthony Oppong as members.

They have all pleaded not guilty to respective charges ranging from Conspiracy to commit crime to wit; high treason, treason and Abetment.

In Court on Monday, when asked by Lamtiig Apanga, counsel for WOII Esther Saan if he has received a complaint of sexual abuse from his client’s, the witness responded in the affirmative.

But, the witness described the complaint of the said sexual abuse as “intriguing.”

“My Lord, I have received a complaint last Friday, July 9 and it is very intriguing. My Lord, I say it is intriguing because the reality is that, Mama Gee (WO II Esther Saan as affectionately called) tried to escape custody and tried all means including attempting to seduce a civilian driver who is working with Mechanical Transport Battalion, so, My Lord, prior to that, she feigned a sickness when she was at Signal Regiment Guardroom seeking to be admitted at 37 Military Hospital. We asked that she should be handcuffed in the hospital when we knew she was making overtures to run away.

He explained further that, “when the military police went there, the doctor said she was not sick and was returned to the guardroom and so we changed her cells.”

According to the witness, ‘When she tried to seduce the civilian driver, she was changed again to Recce guardroom and I visited her will Col Amponsah in the evening and apologised and indicated that she was ashamed so that is why it (complaint) is intriguing because now it is coming out as a complaint.”

The former Director-General of Defence Intelligence, Ghana Armed Forces, told the court that, “the military police have a report of the attempt to seduce the driver.”

The witness told the court that the guardroom is one of the most secured places where a suspect or accused is kept.

Asked by counsel to tell the court, the time in which the said incident occurred, the witness said, it was in the night but will have to confer for the exact time.

When it was put to him that, Civilian employees of the military do not have access to guardrooms at night, the witness said, “he was detailed as a duty driver so he was performing a duty.”

The witness also told the court that, “a suspect in the guardroom does not stay there 24/7 sometimes we bring them out to bathe, to eat… . When that happened, we suspect there was a possibility of collusion, so we changed her location.”

He told the Court that, he does not remember the name of the said civilian driver off head but “I know there were some investigations initiated.”

When counsel put to him that his suggested answer that, “there will be a possibility of collusion was based on your own assumption,” the witness said “my intelligence assessment shows.”

The witness said it was false when it was suggested to him that, there was a toilet, bath in the cells where the accused was kept.

“My Lords, that particular place she was and attempted to seduce the civilian driver there was no toilet…she was moved to about 5 cells because of her overtures escape.

The witness also said that it is false when it was suggested to him that, the only way A6 could have any direct interaction with that civilian employee at the time of the sexual abuse was when the civilian employees entered her cells.

When counsel put to him that, his alleged case of A6 escaping has never been put before this court nor even during application for bail, the witness said, he raised the issue with the AG.