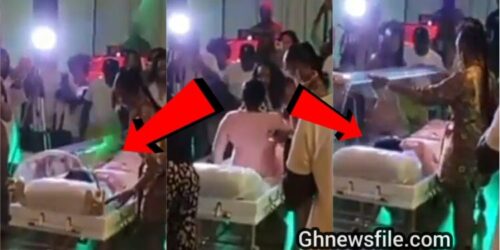 Ghnewsfile.com has sighted a shocking video which shows how a lady arrived at her birthday party in a coffin.

In the video, a lady was seen making an entrance for her 50th birthday party in glass-topped coffin while a poem titled Life After Death was recited as she made her entrance.

The theme which she chose for her birthday party was “Life after death”.

When she emerged from the coffin, she gave her guests a rendition of Beyoncé Sweet Dreams.

Many are still left in shock with their questions unanswered as to what could have influence her decision in making such choice of entrance to her birthday party.