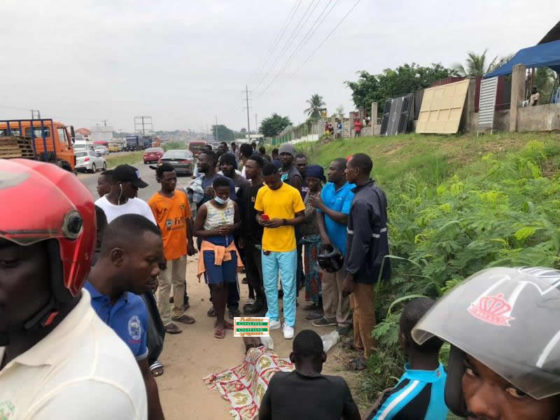 An Okada rider, said to be in his mid-20s, has been stabbed to death at Satellite Junction on the Accra-Nsawam highway.

The deceased, identified as Cornelius Tamakloe, was last seen around 10:00 pm on Sunday.

His lifeless body was found on Monday morning by the roadside with a deep cut in the upper part of his left arm.

According to witnesses, he was stabbed during a misunderstanding at a pub where he had gone to see the Euro 2020 final.

His sister, Enyo Tamakloe, told Joy News: “We had been looking for him all morning till we were told that his body had been found on the road. So we came to identify the body and it’s him.”

Some Okada riders, who spoke to Joy News, said they know him and actually spoke to him just last night during the England-Italy final.

“We even shared a joke. It’s really shocking to learn now that he has been stabbed to death,” one of them said.

The police have begun investigations into events that led to his death while his body has been transported to the Police morgue for autopsy and preservation.