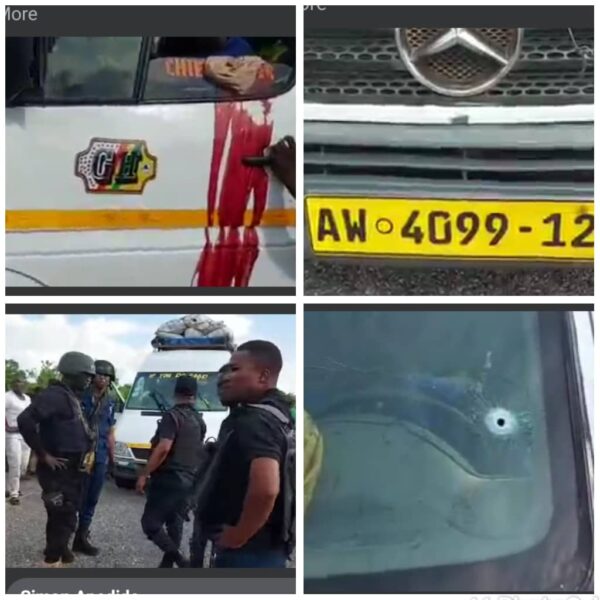 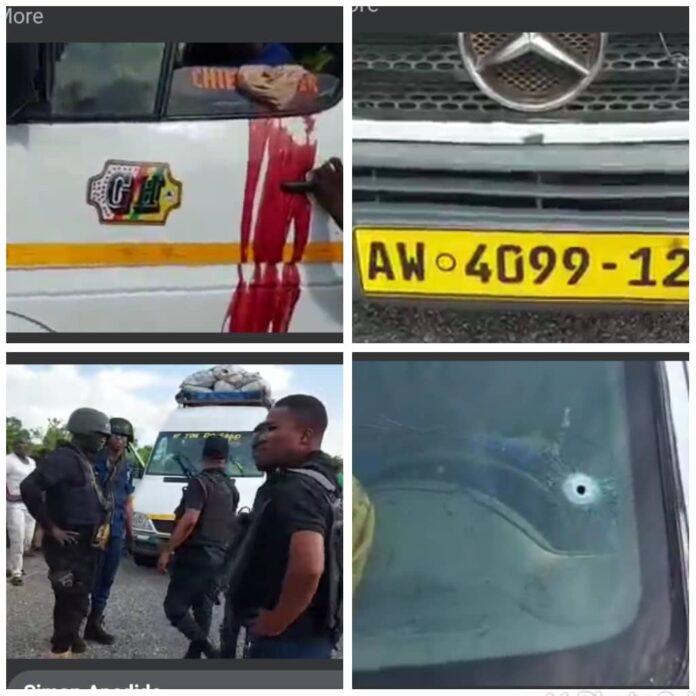 Highway robbers terrorising commuters in Pru East and West, Sene East, Sene West Districts, and the Atebubu-Yeji Highway within the Eastern Corridor of Bono region have killed a driver in the latest deadly robbery attack on Sunday.

The armed robbers attacked a Sprinter Benz mini bus with registration number AW 4099-12 onboard with passengers, shot the driver dead through the windscreen before robbing the passengers mostly traders.

The latest incident has stirred anger among the residents who are threatening a demonstration over the rampant robbery incidents in the area which the police seem to have no antidote.

The latest incident comes on the heels of a boycott of classes by teachers in Sene East and West since Thursday over the killing of two teachers and injury of others by armed robbers.

The Sene East District Secretary of Ghana National Association of Teachers (GNAT) Patrick Owusu told Kasapa News they will only return to the classroom if they see intensified Police patrol and erection of Police checkpoints on robbery-prone areas.

According to him, the armed robbers mostly strike on Wednesdays when most traders transport their goods for Thursday market in the area.

A petition addressed to stakeholders by GNAT stated that” Due to the current happenings in our district we the teachers of Sene-east have withdrawn our services until further notice. These are the reasons why we are withdrawing our services: The killing of the late Elija Asante, a teacher. Dated on the 6th May 2021. The current shooting of our colleague, late Ennin- Prah Junior, a teacher on the 7th July 2021.The shooting of our brother Mr. Emmanuel A. Gyamfi who also escaped from death during the armed robbery attack. Dated on 22nd June 2021. Another attack on our colleague Mr. Boadum Seth, a teacher. Dated on 17th March, 2021″.

The petition added that “Yesterday’s incident happens to be the fourth time a robbery incident has occurred at the place where Ennin-Prah Junior was killed. Meanwhile, the police have set a barrier 200 meters away from where the incident happened. In view of the above, we are withdrawing our services until the following demands are met:
Provision of proper and competent military patrol team”.

They demanded the “Provision of police visibility at every 200meters along Atebubu – Kwame Danso – Kojokrom road. The mounting of unnecessary barriers by the police within the townships must be avoided. Arrest and prosecute the armed robbers who killed our colleagues”.

Kasapa News has gathered that the Bono East Regional Minister Mr. Kwasi Adu Gyan has met with the teachers and assured them of improved security.

The Pru East Member of Parliament Dr. Kwabena Donkor has recently lamented over the rampant armed robbery attacks and insecurity along the Eastern Corridor of the Bono Region.

The former Power Minister, therefore, called on the National Security, Interior Minister, and the Inspector General of Police to engage their men to clamp down on the criminals to safeguard traders and commuters.