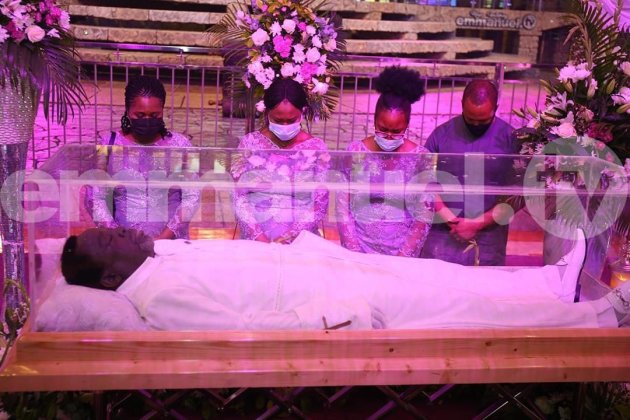 The excruciating pain the death of some world-renowned celebrities and famous people has left in the hearts and minds of millions across the world remains fresh anytime they are remebered.

From Martin Luther King Jnr to Whitney Houston, To Michael Jackson, to TB Joshua, when we think about how they passed away while at the peak of their respective careers and callings, we are drowned in chilled shivers.

In today’s, edition of Celebrity Life And Facts, we bring you the open caskets of some of these famous people and celebrities whose death many have still not gotten over. Some died at very young age but their memories remain traceable and the legacies they left remain quite honourable.

According to Report, Michael Jackson acute propofol and benzodiazepine intoxication at his home on North Carolwood Drive in the Holmby Hills neighbourhood of Los Angeles.

His death remains one of the widely publicized in the history of music and the pain that his demise has left in the hearts of many remains fresh.

Michael Jackson used his last breath to plead for “some milk”, his nickname for Propofol. According to the doctor responsible for his death, Michael Jackson’s exact last words were a testament to his commitment to his work “And I don’t want them to cancel it, but they will have to cancel it.

Bruce Lee died aged 32, he collapsed and was rushed to Hong Kong Baptist Hospital while on set. Bruce Lee’s death was ruled “death by misadventure.” Coroners stated he had a severe allergic reaction to the tranquillizer in Equagesic, causing his brain to swell.

Martin Luther King Jr died at age 39 after he was shot and mortally wounded as he stood on the second-floor balcony outside his room at the Lorraine Motel in Memphis, Tenn. He was pronounced dead at 7:05 p.m. at St. Joseph Hospital.

There were several assassination attempts on Martin Luther King Jr before his death.

In his memory, the third Monday in January is Martin Luther King Jr. Day (often abbreviated to “MLK Day”). It has been a federal holiday since 1986. This means that it is an observed holiday for federal employees, as well as for many schools and businesses.

The American singer died at age 48 on February 22,2021 at her residence in Beverly Hills, California, USA.

Whitney Houston who was also an actress was found dead in a bathtub in a Beverly Hills Hilton hotel room. She died just before the Grammy Awards held. It was confirmed that Houston drowned accidentally. But heart disease and cocaine use are the contributing factors.

Thomas Hagan was convicted for assassinating Malcom X at a time when Malcolm X began to grow disillusioned with the Nation of Islam, as well as with its leader Elijah Muhammad.

He is best known for his time spent as a vocal spokesman for the Nation of Islam, as well as his lifelong advocacy for Black empowerment and his criticism of the civil rights movement led by Martin Luther King Jr.

He subsequently embraced Sunni Islam and the civil rights movement after completing the Hajj to Mecca, and became known as el-Hajj Malik el-Shabazz. After a brief period of travel across Africa, he publicly renounced the Nation of Islam and founded the Islamic Muslim Mosque, Inc. (MMI) and the Pan-African Organization of Afro-American Unity (OAAU).

Officially, James Brown died of heart failure in the early hours of Dec. 25, 2006, in the presence of only his personal manager, Charles Bobbit. He was 73 years old, he had abused cocaine and PCP for most of his life, and his heart finally gave out as a result.

Before passing away in his sleep, James Brown’s dying words were, “I’m going away tonight.” In December 2006, Brown arrived at a dentist appointment a few hours late, appearing weak and dazed.

The Samoan American professional wrestler, best known for his time with World Wrestling Entertainment under the ring name Umaga. He died on Decemeber 4, 2009 at Houston, Texas, USA.

On December 4, 2009, Fatu 36, was found by his wife in their Houston, Texas home, unresponsive and with blood coming from his nose. A 911 call was made and Fatu was rushed to a hospital by ambulance.

Paramedics determined Fatu was suffering a heart attack and they were able to restart his heart, although he showed no signs of brain activity. He was kept on life support for much of Saturday, and had later suffered a second heart attack and was ultimately pronounced dead at around 5:00 PM.

At age 50, Bernie Marc died from complications from pneumonia. In the coverage of his death, the media has reported that in 1983, doctors diagnosed him with a mysterious ailment called sarcoidosis.

The Bernie Marc Show ended two years before his death. The show had a loyal viewership but suffered due to the network’s constant time period changes.

Despite such, the show won several awards and surpassed 100 episodes, taking it into syndication territory before its eventual cancellation.

The Nigerian televagelist, philanthropist, Temitope Balogun Joshua was the Founder of the Synagogue, Church of All Nations, a Christian megachurch that runs the Emmanuel TV television station from Lagos. He died on June 5, 2021.

TB Joshua is being buried in Lagos after a week of funeral rites. Thousands of mourners have gathered at his church, the Synagogue, Church of All Nations (SCOAN) in the Ikotun area of Lagos. The 57-year-old died on 5 June after a brief illness, the church said.

He grew his net worth to around $150million, according to Glusea, a website which ranks the net worth of celebrities. Joshua owned a fleet of luxury cars and added a private jet to his collection, yet he remained an outsider.

Accommodation fees within SCOAN premises cost between 800 USD to 4,000 USD per week; $800 weekly for shared bunks and $4,000 for 5-star standard room. Normally, you will pay weekly and this covers feeding and other amenities.

VIDEO: KK Fosu helped me when I was nobody – Sarkodie

HOT VIDEO: Mzbel flaunts her nakedness as she prays for Mahama’s return