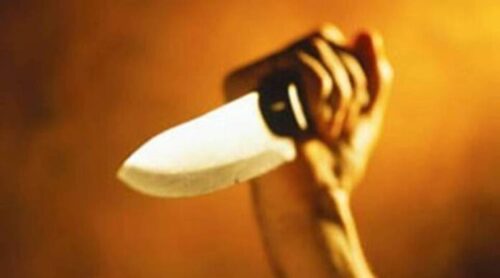 A 38-year-old taxi driver Kojo Kum popularly known as One Stone has poisoned himself to death after allegedly stabbed his wife Adwoa Adiza who also died.

The Taxi driver reportedly took poisonous drugs to kill himself.

In an interview with Kasapa FM.s Yaw Boagyan, an eyewitness Mr. Fred Abaja said on Tuesday evening around 8:30 PM, three visitors came to the brother of the deceased, Mr. K.K and asked about the location of his sister but they were told she has gone to the market for her business.

The visitors then prompted that his sister has been stabbed to death by her husband. The visitors were CID Officers.

They all went to the house and found out that Adiza had been stabbed in the middle of her breast with the knife stuck in there.

The eyewitness said before stabbing her, the suspect turned up the volume of his TV set.

He indicated that after killing her, the suspect ran to his hometown in the Ajumako area to take in poisonous substances.

Information gathered by Boagyan indicated that the suspect had a misunderstanding with his wife over an impending divorce.

The woman had reportedly been threatening her husband with murder if he divorced her.

The matter was subsequently settled by family members on Sunday, July 4.

According to the police, the driver went unconscious by the roadside at Ekumfi Etuam after taking in the poisonous substance. Some residents saw him and reported to the police where he was taken to the hospital for care.