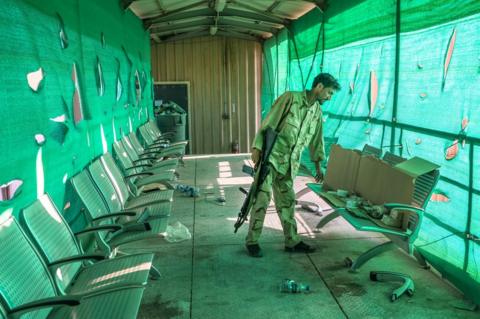 The US military left Bagram Airfield – its key base in Afghanistan – in the dead of night without notifying the Afghans, the base’s new commander said.

General Asadullah Kohistani told the BBC that the US left Bagram at 03:00 local time on Friday, and that the Afghan military found out hours later.

Bagram also contains a prison, and there are reportedly up to 5,000 Taliban prisoners left in the facility.

The Taliban have been advancing rapidly in Afghanistan as US troops withdraw.

General Kohistani said on Monday that Afghan forces were expecting the Taliban to attack Bagram.

Speaking to reporters at the airbase, he said he was already receiving reports the group was making “movements in rural areas” nearby.

“You know, if we compare ourselves with the Americans, it’s a big difference,” Gen Kohistani said. “But according to our capabilities… we are trying to do the best and as much as possible secure and serve all the people.”

The US announced on Friday that it had vacated Bagram, effectively completing its military campaign in Afghanistan ahead of the official end date of 11 September, announced by President Joe Biden earlier this year.

The Americans left behind about 3.5 million items, Gen Kohistani said, including tens of thousands of bottles of water, energy drinks and military ready-made meals, known as MREs. They also left behind thousands of civilian vehicles, without keys, and hundreds of armoured vehicles, the Associated Press reported.

They took heavy weapons with them and detonated some ammunition stocks, but left behind small weapons and ammunition for the Afghans, Gen Kohistani said.

Asked by the Associated Press about the late-night withdrawal from the base, US military spokesman Colonel Sonny Leggett referred to a statement issued last week that said US forces had co-ordinated their departure from various bases with Afghan leaders.

Within 20 minutes of the US’s departure on Friday night the electricity was shut down and the base was plunged into darkness, the AP reported – a signal to looters who smashed through barriers and ransacked the abandoned buildings. Leftover items from the base have ended up in nearby scrap yards and second hand shops.

At its height, Bagram base was home to tens of thousands of troops. It ballooned from a basic Afghan air base to a mini-city with swimming pools, cinemas, spas and imported fast food outlets Burger King and Pizza Hut.

The base has shifted hands over the years. It was first built by the Americans, for Afghanistan, back in the 1950s, before falling into Soviet control when the Red Army invaded in 1979.

It was later occupied by the Moscow-backed Afghan government and then a mujahideen administration, before eventually winding up in Taliban hands when the group swept to power in the mid 1990s.

When the US invaded in 2001, it deposed the Taliban and took control of the airbase, transforming it into a sprawling complex from which it fought its war against the group.

The late-night withdrawal by the US hands control of the base to a much less well-equipped force that could struggle to defend it from the Taliban, which has made swift advances in recent weeks across the country, seizing rural districts and surrounding some larger cities.

The group claims to have taken more than 10 new districts in the past 24 hours. Despite the movements on the ground, stalled peace talks were renewed last week between representatives of the Talibn and Afghan government in Doha, the capital of Qatar.

Zabiullah Mujahid, a Taliban spokesman, told the BBC that they would present a plan to the team negotiating on behalf of the Afghan government and both sides would discuss it.

Gen Kohistani has roughly 3,000 troops under his command – significantly less than the tens of thousands of US and allied soldiers that once occupied Bagram airbase.

About 1,000 Afghan soldiers fighting the Taliban in the north of the country fled over the border into Tajikistan on Monday, according to officials, raising fears over the military’s ability to stave off further advances by the group.

Twenty years of conflict in Afghanistan – what happened when?

From 9/11, to intense fighting on the ground, and now full withdrawal of US-led forces, here’s what happened.

Al-Qaeda, led by Osama Bin Laden in Afghanistan, carries out the largest terror attack ever conducted on US soil.

Four commercial airliners are hijacked. Two are flown into the World Trade Centre in New York, which collapses. One hits the Pentagon building in Washington, and one crashes into a field in Pennsylvania. Nearly 3,000 people are killed.

A US-led coalition bombs Taliban and al-Qaeda facilities in Afghanistan. Targets include Kabul, Kandahar and Jalalabad. The Taliban refuse to hand over Bin Laden. Their air defences and small fleet of fighter aircraft are destroyed.

The Northern Alliance, a group of anti-Taliban rebels backed by coalition forces, enters Kabul as the Taliban flee the city.

By the 13 November 2001, all Taliban have either fled or been neutralised. Other cities quickly fall.