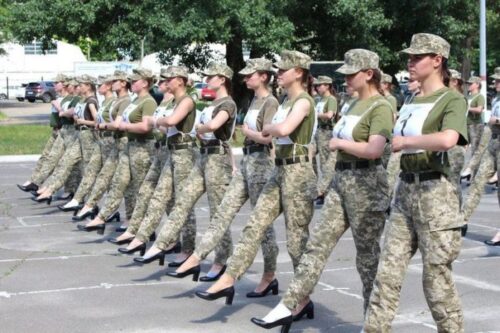 Plans by Ukraine’s defence ministry to have female soldiers march in high heels instead of army boots in a parade next month have caused angry reactions.

Iryna Gerashchenko, an opposition member of parliament, said it was sexism, not equality

Ukraine is preparing to stage a military parade on 24 August to mark 30 years of independence following the collapse of the Soviet Union.

The defence ministry says the shoes are part of regulation-dress uniform.

Many in Ukraine expressed shock at the plan, with a group of lawmakers calling on Defence Minister Andriy Taran to offer an apology.

“The story of a parade in heels is a real disgrace,” commentator Vitaly Portnikov said on Facebook, arguing that some officials had a “medieval” mindset.

Ms Gerashchenko said she initially thought the pictures of women soldiers rehearsing in combat trousers and black pumps with block heels was a hoax. She said it was sexism, not equality, and wondered why the ministry thought heels were more important than designing body armour tailored to women.

Maria Berlinska, an army veteran, said a parade should demonstrate military prowess, but this one was to titillate senior officers in the grandstands.

Olena Kondratyuk, the deputy parliamentary speaker, pointed out that more than 13,500 women had fought in the current conflict pitting Ukraine against Russian-backed separatists in the east.

More than 31,000 women now serve in the country’s armed forces, including more than 4,000 who are officers.

US left Bagram Airbase at night with no notice, Afghan commander says