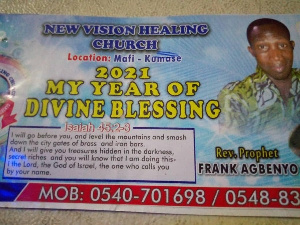 The alleged incident transpired at the beginning of the year, 2021

The Tongu Divisional Police Command in the Volta region is investigating one prophet, Frank Agbenyo, founder and leader of New Vision Healing Ministry International Church in Mafi-Dzogadze within the Central Tongu District for allegedly having a forced sex with his church deacon’s wife.

According to the Police, although the victim, Favour Agbozo failed to report the alleged incident at the appropriate time, Police will not shield the perpetrator when found guilty at the end of investigation.

The Police Command told a team of journalists who visited the Command for fair hearing of the development.

The alleged incident transpired at the beginning of the year, 2021 but out of fear Favour Agbozo did not speak of the issue until April 24, 2021 when she revealed the act to her husband, Orlando Tome.

Narrating the matter, Favour said, she went for consultation at the mission house but could not recall what led her into the prophet’s bed until ” he was done having sex with me”.

The young woman, looking very traumatised continued her ordeal saying “He (Prophet) asked me to drink a drop of honey he pulled from his room as part of performing prayers and while praying for me with his hand on my head, I felt so heavy and weak and when I became normal, I saw myself naked beside him in bed”

She then alleged that the prophet used a charm to lure her into the act, adding that she always feels “uncomfortable and guilty each day especially when I am alone and in the night.”

Her husband, upon hearing the matter reported it to the elders of the community for a solution. He said, the elders sought for a ram and assorted drinks to clean the mess but he disagreed with the idea and called for legail action against the prophet.

Orlando Tome alleged that, the Prophet, popularly known in the area as Fire Pot together with his two wives and families have apologised to him on several occasions but he wants the laws to deal with him, this to serve as a deterrent to others.

A visit to the family at the time of filing this report saw the young woman in a very devastated manner, sitting quietly on a wooden bench with her seven months old baby boy in front of the house, one can tell how traumatised she was because her husband is seeking for divorce if justice is not served soon.

A family friend, Rev, Dr. Wisdom Edem Aveva who spoke to the media noted that, justice must be served in order to give a peaceful mind to the two partners.

He called for “The international community, the advocacy groups, opinion leaders to come into this issue for justice to be served because as I am talking, the lady in question is traumatised and she has to be taken to a prayer camp and the hospital”

It was also made known that, the said prophet is fond of putting other women in bed despite having two wives.

Meanwhile, South Tongu District Hospital, where Favour went for diagnosis could not detect whether she was raped because the timeline to detect rape has elapsed.