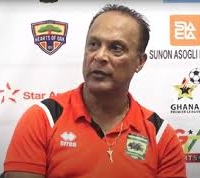 • Mariano Barreto has been charged for his 11 against 15 comments

The Disciplinary Committee of the Ghana Football Association [GFA] has announced that Asante Kotoko coach, Mariano Barreto has been charged for his comments against match officials in their game against Legon Cities.

Mariano Barreto after Asante Kotoko‘s 1-0 win over Legon Cities made allegations against the referees by stating that Asante Kotoko SC played 11 against 15.

The comments of Asante Kotoko according to the Ghana Football Association breached Article 38(8)(c) and 34(6)(d) of the GFA Premier League Regulations, 2019 in respect of violations of the Associations Regulations.

Barreto has now been charged with a two-game ban and a fine of GH₵3000.

“That Mariano Barreto is found guilty of the Charges.

“A fine of GHc3,000 is hereby imposed on Mariano Barreto in accordance with Article 6.1(c) of GFA Disciplinary Code.

“That Mariano Barreto, Head Coach of Asante Kotoko SC is hereby handed a two-match suspension in accordance with Article 6(2)(a) of the GFA Disciplinary Code,” part of the ruling read.

Source: www.ghanaweb.com
Related Topics:ANDBANScoachfinesGFAkotoko
Up Next

VIDEO: Qualifying for the 2022 World Cup is our major focus now – Andre Ayew