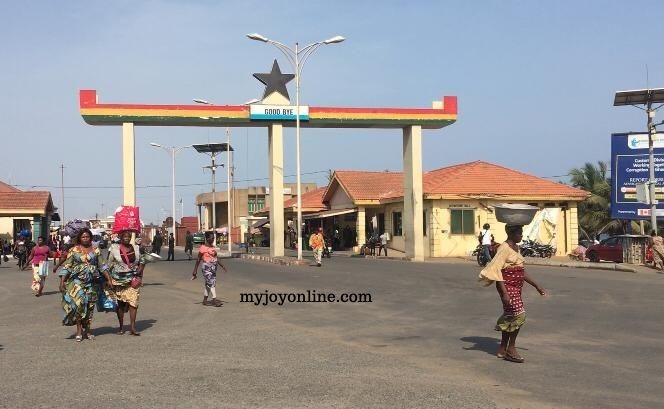 Joy News’ investigations have uncovered how some officials of the Ghana Immigration Service demand monies to allow illegal entry into the country through unapproved routes near the Aflao border.

The officers were filmed on camera receiving various sums of money from the travelers on these routes. This is in spite of President Akufo Addo’s announcement of the closure of land borders to limit the spread of Covid-19.

This reporter and his team were never subjected to the regular check when entering the country through an unapproved route.

A commercial motor operator the investigative team decided to call Peter said he has been carrying passengers through unapproved routes since the official closure of the border.

Maybe his point is just a claim. So the team decided to verify while Peter gave the project lead a ride from Ghana to Togo. They met this official from the Ghana Immigration Service at one of the unapproved routes.

The Joy News investigative team caught another heavily built man at one of the illegal entries leading into Togo requesting that we pay ¢5.

We counted at least two persons who were made to pay similar amounts to a man in plain clothes while Togolese security officials look on.

After a long negotiation with a man in his early 30s at another unapproved route, he agreed to let the investigative team pass after we paying ¢5.

After crossing into Togo side, we met a man in his late forties. He demands the team pay ¢5 to allow entry into Togo. He rejected a ¢2 offer on the basis that the money will depreciate when changed into CFA Francs.

He said they consider the revelation important given the raging Covid-19 pandemic and the emerging threat of terrorism.

“We have had to interdict four immigration officials at Aflao border for a similar offence. We were expecting that it would serve as a deterrent,” he added.

He indicated that there incentives in place to dissuade and motivate staff from engaging in such misconduct.

BREAKING NEWS : Parts of Makola market up in flames (VIDEO)