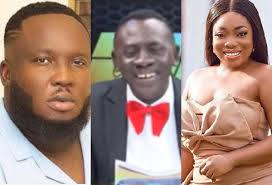 • Kaywa has called out Akrobeto for mocking born-again Moesha Buduong

The actress, noted for putting her curvaceous body on display has revealed that she is now a born-again Christian and as such, pulled down all semi-nude photos and videos of herself on her social media accounts.

Videos making rounds on social media captures the actress in a church where she was seen surrendering her life to Christ. The news however has attracted mixed reactions, whereas some believers are rejoicing over her repentance, some are of the belief that her decision is only a nine-day-wonder.

In the latest edition of ‘The Real News’ by Akrobeto on UTV, the presenter made a mockery of the born-again Christian. The presenter who couldn’t hold himself from laughing noted that ‘repentance’ has now become a trend for personalities in the country. He cited Fetish Priestess, Nana Agradaa and actress Akuapem Poloo as examples.

In a video sighted by GhanaWeb, the actor stated: “Wonders shall not end, Moesha says she has repented and given her life to Christ, that is good (claps)…. But what might have led her to repent? Well, it is a good decision and I will not speak ill of you (laughs). First, it was Akuapem Poloo who said she has repented, then Nana Agradaa. Don’t repent, continue being your old self don’t repent but I am only human and I can’t judge you. All souls belong to Christ, it is left to God to forgive you or not, so Moesha, may God be with you (laughs).”

His actions did not go down well with Kaywa, who has in turn written a post, condemning persons who are making fun of the actress. According to him, “there is joy in the presence of the angels of God over one sinner who repents” adding “why laugh over what makes Heaven Rejoice?”

He wrote: “I’m seriously saddened by this…Why make adverse mockery of someone’s decision to repent and give her life to Jesus? The bible is clear on this..… Luke 15:10 In the same way, I tell you, there is joy in the presence of the angels of God over one sinner who repents…why laugh over what makes Heaven Rejoice??? Who Gave us the power to Judge someone’s salvation? Let’s be careful. Dear @moeshaboduong Jesus Christ is very proud of you, and always remember you made the BEST decision for yyourSoul.”

Source: www.ghanaweb.com
Related Topics:amImakemockeryMoesha'sOFrepentancesaddenedWhy
Up Next