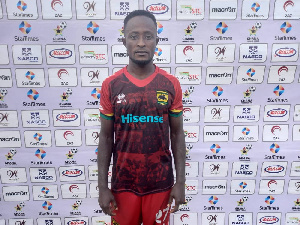 Zubairu Ibrahim’s early strike for King Faisal in the first half was cancelled out by Andy Kumi who delivered a close-range header in the late stages of the game to secure a point for the Porcupine Warriors.

The results mean Kotoko have closed the gap to two points on their arch-rivals Hearts of Oak who are yet to feature in their match-week 32 encounters against Ebusua Dwarfs.

The point for King Faisal moved them into 14th position, two points away from relegation with other teams around the bottom half yet to feature in week 32.

Kotoko struggled in the opening minutes of the first half as they least threatened the King Faisal defence who have conceded the most goals in the league.

King Faisal deservedly took the lead in the 15th minute after Ibrahim Zubeiru kept his composure in the penalty box and struck the ball past Kotoko goalkeeper Kwame Baah.

Kotoko tried to pull parity in the first half but the King Faisal defence stood firm to take the lead into halftime.

King Faisal started the second on the back foot as they looked to hold on to their lead with Kotoko being more purposeful in the attacking third.

The introduction of striker Andy Kumi seemed to have sparked Kotoko’s final third as they looked more likely to get the next goal.

Kwame Peprah had the chance to double the lead for the away side against the run of play in the 70th but his strike at goal struck the upright to the relief of the Kotoko defence.

Andy Kumi deservedly got the equalizer for Kotoko in the 84th minute with a close-range header to secure a point for the Porcupine Warriors.

Source: GNA
Related Topics:AGAINSTKUMILASTstriking
Up Next

‘Today is Nana Yaw, tomorrow it will be me’ – George Afriyie on vindictive GFA