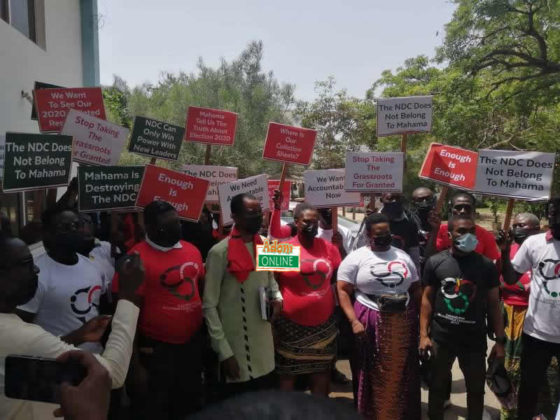 The youth wing of the opposition National Democratic Congress (NDC) has outlined the routes for its planned protest on Tuesday, July 6, 2021.

This comes after the police okayed the protestafter initially declining the request to provide the protesters the needed security.

But after successful deliberations between the two sides, the police gave the green light for the protest dubbed, ‘A March for Justice” to come off.

In a statement, signed by George Opare Addo, National Youth Organiser of the NDC, the time for convergence is 6:00 am with Accra Mall as the converging point.

Protesters will, from there, march through the Liberation Road to Opeibea House through Aviation road through to the Lands Commission.

They will then proceed to the Flagstaff House through the Switchback road, use the Arko Adjei interchange through to Parliament House.

The youth wing has assured of the safety of demonstrators and the strict enforcement of COVID-19 guidelines.

“Leadership appreciates the goodwill and support the street protest has received so far from Ghanaians from all quarters, CSOs, other political parties, and allied partners. This demonstrates that the generality of Ghanaians is in support of marching against the social ills this government has visited on us as a people,” the statement read in part.

The group will at the Jubilee House present a petition to President Nana Addo Dankwa Akufo-Addo.

A similar petition will also be submitted to the Speaker of Parliament at the Parliament House.

The protest is to demand justice for all persons “killed and brutalised by state-sponsored thuggery and or adventurism by police and military forces.”

It is also to demand social justice for the unemployed in the country.

The initial routes included Madina, the Central Business District of Accra, Osu and Lapaz. They had also indicated that they would petition the Inspector-General of Police at the Police Headquarters, but it appears these have changed after the engagement with the police.