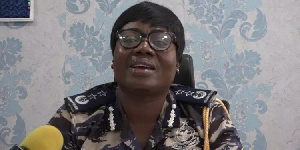 Director-General, Welfare of the Ghana Police Service, COP Maame Tiwaa Addo-Danquah, has disclosed police investigations into the murder of social activist and #FixTheCountry campaigner, Kaaka Ibrahim Mohammed, do not support claims that he was murdered because of his activism.

She would however not disclose what the police found to be the motivation for the killing saying the matter is still under investigation.

“In terms of Ejura, Kaaka’s murder, they gave the impression that nothing was not being done (sic) and that the person was attacked by people who were angry because he was an outspoken person and all that but investigation has revealed that it is actually not the case and that because the case is still under investigations he [IGP] doesn’t want to compromise the investigation”, she said.

COP Maame Tiwaa was addressing the media after the Inspector General of Police had a close-door meeting with the Economic Fighters League and conveners of #FixTheCountry, Maame Tiwaa who requested to meet with him.

The purpose of the meeting, according to the activists was to discuss issues relating to the death of the colleague, foiled protests and what they term “selective application of the law”.

She said in all the meeting was fruitful, explaining the IGP was able to engage with the activist on almost all their concerns.