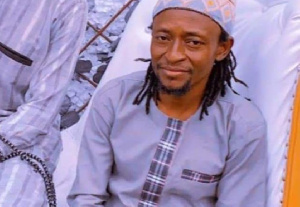 Before his untimely demise, Macho Kaaka born Kaaka Anyass Ibrahim Mohammed was very loud in reference to the infamous #FixTheCountry.

As the majority of the originators of the #FixTheCountry live in Accra, Macho Kaaka who appears to be a patriot citizen started his #FixTheCountry movement from Ejura where he lives.

So, Macho Kaaka was taking pictures and videos of the bad state of Ejura township. But he couldn’t live long as his life on earth has been cut shot just because he was fighting for the betterment of his motherland, Ghana.

As we speak, no one points out what exactly led to the mob that attacked him, however, the videos below seem to point to the fact that it might have stemmed from the fact that he was always speaking out against the rots happening at Ejura.
His videos were always titled, “What’s going on in Ejura?”

Here are some of his posts on his Facebook page: