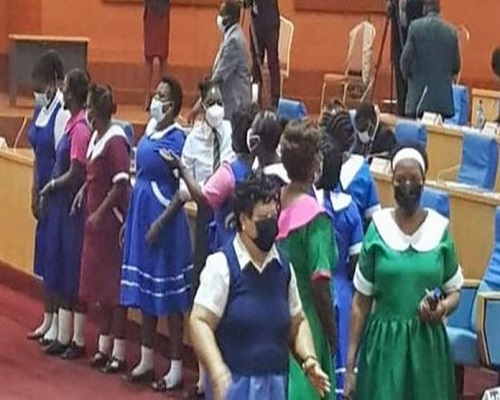 Malawians have been sharing photos on social media of female Members of Parliament dressed up as schoolgirls – some delighting in their outfits others unimpressed by the stunt.

The country’s 193-member Parliament usually has a strict dress code, but it was relaxed on Tuesday for the chamber’s 43 female politicians.

MP Gotani Hara said the gesture was meant to send a strong message to girls from successful career women that “with hard work, everything is possible”.

Studies show that up to 15% of Malawian girls drop out of school before finishing primary education – this is put down to a range of reasons including poverty, pregnancy or being forced into marriage.

Some people found humour in how the politicians were dressed, one even carried fried maize in a plastic bottle typical of snacks that children, particularly in rural areas, take to school.

But others were critical saying more action should be taken to help girls actually stay at school.