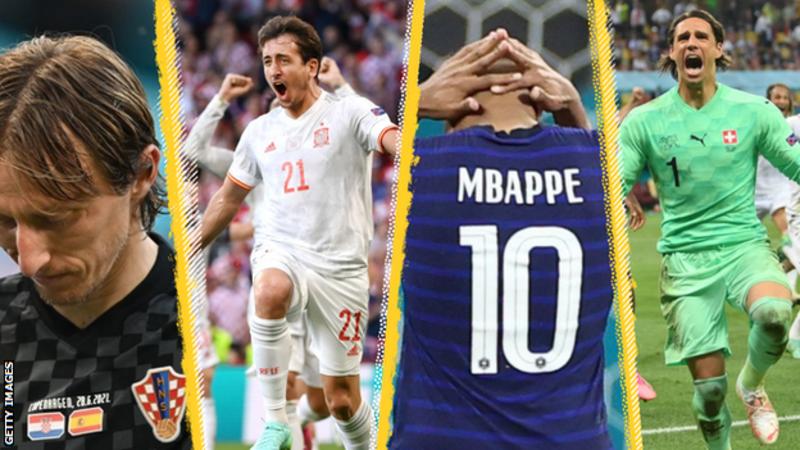 Was it the greatest day of the Euros, ever?

Two games went to extra time after late goals overturned 3-1 deficits in extraordinary fashion and there were 14 goals in total – the second most in the competition’s history.

Last Wednesday there were 18 goals across four games but today’s 240 minutes of drama gave that record a good run for its money.

In Copenhagen, there was a bizarre own goal, late heroics from substitutes and “broken hearts” at full-time.

In Bucharest, there was a wonder goal, a penalty shootout and a giantkilling.

Chris Sutton summed it up on BBC Radio 5 Live: “Magic Monday. What an incredible evening.”

Simply put, it was football in its purest form.

An epic game with ‘unspeakable sadness’

For Spain manager Luis Enrique, it was an “epic game” with a “beautiful ending” but Croatia midfielder Nikola Vlasic’s heart was “as big as a house and then it broke after we conceded twice”.

Those emotions sum up what a frantic evening it was as Spain progressed to the quarter-finals following a 5-3 win over Croatia in extra time.

Enrique’s side were rocked when Croatia substitutes Mislav Orsic and Mario Pasalic scored twice in the final five minutes to come back from 3-1 down, but Spain rallied as the added 30 minutes produced yet more drama.

“I’ve lived through really intense matches as a player and manager but this one genuinely had a bit of everything,” said Enrique afterwards.

“I’m ready for games like this if we have another – but I’m not sure if my family or the fans feel the same!

“The end of the match was so beautiful – I’m glad that the game gave us a second chance to win it. It was an epic game. I’ve experienced many intense games in my career but this was one of the best.”

The scenes of jubilant celebrations from the Spaniards were in contrast to the devastated figures of the Croatians – “unspeakable sadness”, it was described as by Vlasic.

“When we netted twice in quick succession to draw level my heart was as big as a house and then it broke after we conceded twice,” he told HRT.

Former Scotland midfielder Graeme Souness told ITV: “We’ve been waiting for the competition to come alive and it did tonight. That was the best game in the competition so far.”

‘The greatest game on the planet’

But if anything was to contest for the title of “best game so far” it was the one that followed in Bucharest as Switzerland shocked world champions France.

Didier Deschamps’ side trailed at half-time but two goals from Karim Benzema and a stunning long-range strike from Paul Pogba put them in the driving seat.

Switzerland’s Haris Seferovic and Mario Gavranovic then forced extra time and – if there was not enough drama already – France superstar Kylian Mbappe’s deciding penalty kick was saved in the shootout.

Former Republic of Ireland midfielder Roy Keane told ITV: “As neutrals we got sucked right into it, honestly. This is why it’s the greatest game on the planet.”

Switzerland captain Granit Xhaka said they “made history”, while goalkeeper Yann Sommer, the hero of the shootout, described it as “crazy”.

“What a game, what a night of football! The end is crazy, it is beautiful, but how we came back during the game from two goals down… I am really proud of this team,” he added.

“We always believed, we always said if we are down we will go to the end and not give up. It was our chance to go through. It is incredible how we played.

“Anything is possible but that is always in football. We believed it, we are a small country but we have a lot of quality and have experience in our squad. We showed it.”

France goalkeeper Hugo Lloris added: “We went through every emotion possible and honestly that was football the way we like it. But the two goals we conceded in the last quarter of an hour really hurt us.”

bbc.com
Related Topics:14gamesgiantgoalsKILLINGONETWO
Up Next