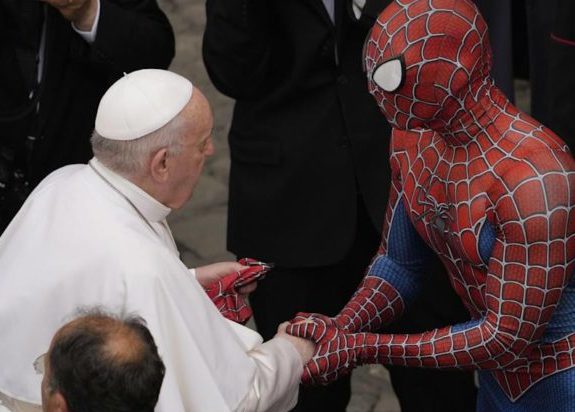 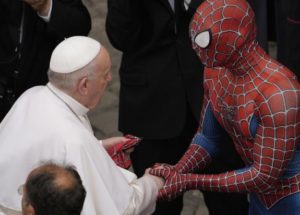 Mattia Villardita, the 28-year-old who dressed up as Peter Parker’s superhero persona, said it’s his mission to bring joy to children in the hospital.

“This all came about from a personal story. I was a patient for 19 years at the Gaslini Pediatric Hospital in Genoa because I was born with a congenital malformation,” he said.

Villardita started his mission called “Superheroes in the Ward” in 2019, in which he and his friends dress up as superheroes to visit sick children.

While Villardita has a day job, he spends most of his free time dressed as Spider-Man.

Villardita sat among VIP attendees at a general audience hosted by the Pope in the Vatican’s San Damasco Courtyard, where Pope Francis encouraged attendees to observe “humility and fraternity” in their daily lives.

When Villardita met the Holy Father, he gave the pope, who invited him because he knew about his efforts, a Spider-Man mask of his own.

Villardita gave the gift “as a sign, to tell him that through these eyes I daily see pain from sick children in hospitals,” he said.

He asked Pope Francis to pray for the children he visits, and the pope responded by telling him to take photos with children in attendance.

During the pandemic, Villardita made more than 1,400 video calls to sick children because he could not visit them in person.

Italian President Sergio Mattarella honored Villardita in December 2020 as Cavalier of the Order of Merit for being an “everyday hero.”