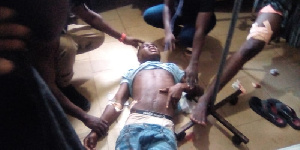 • He was admitted to the Komfo Anokye Hospital where he died on Monday, June 28, 2021

The police and military are reported to have shot into a protesting crowd at Ejura Sekyeredumase in the Ashanti region leaving 4 persons with gunshot wounds.

According to a Kasapafmonline.com report, 2 people have also been reported dead.

This incident comes after some youth took to the streets to protest the death of a #FixTheCountry campaigner, Ibrahim Mohammed popularly known as Kaaka on Monday, June 28, 2021.

The protestors, according to a myjoyonline report, stormed the police station in the vicinity to demand answers concerning the death of Kaaka.

Police personnel at the station had to resort to the use of water cannons to disperse the agitated crowd.

This method did not work entirely as some of the protestors remained on the street despite their colleagues running for their lives.

Wife of the deceased, Zahada Hudu has disclosed that she knows the killers of her husband.

She stated that the deceased #FixTheCountry campaigner was killed after receiving threats for making government unpopular on social media.

She wants the police to thoroughly conduct investigations into her husband’s murder so that the perpetrators will be brought to book.

Meanwhile, the deceased has been buried per his Islamic customs.

You are a lawyer, speak with facts – Kwame Nkrumah Tikese slams Sammy Gyamfi