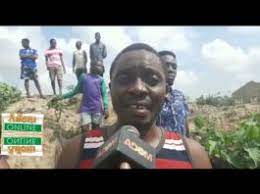 A man believed to be in his late 30s has been found dead in the Okrudu River at Kasoa Komotey in the Awutu Senya East Municipality of the Central Region.

The lifeless body was discovered by residents in the early hours of Friday, June 25, 2021.

The deceased who is yet to be identified was found in a supine position with only a T-shirt on.

Some residents who spoke to Adom News said the deceased was not known in the area.

According to them, they can’t tell if the deceased was killed dumped in the river or committed suicide.

They lamented the frequent killing and robbery cases in the area as they appealed for heightened security in the area.

The Assemblymember for Kasoa Komotey Electoral area, Muhammed Kwabena Ali, commenting on security in the area said he will communicate with the Assembly to get streetlights fixed on the streets.

Meanwhile, the Awutu Senya East Municipal NaDMO Director, Kwame Amoah has visited the scene to convey the body at the hospital.