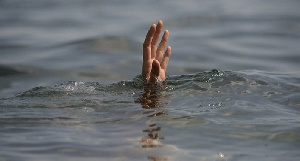 An unidentified man and his wife are feared dead after they reportedly fell into the Susan stream in the Oforikrom Municipality, which had flooded after about two hours of a downpour on Thursday, June 24.

The couple, with their child, were said to have drowned when the wooden bridge on which they were walking to cross the flooded stream collapsed.

According to eye witnesses, some neighbours gathered courage and managed to rescue the child, but could not do anything to save the couple due to the strong current of the running water.

“We saw the couple being swept away helplessly, however, nothing could be done about the situation,” Mr. Kwame Owusu, a resident of Susanso, told the Ghana News Agency (GNA) in Kumasi.

When contacted, Mr. Kwabena Nsenkyire, Ashanti Regional Coordinator of the National Disaster Management Organization (NADMO), said his outfit had been notified of the incident and thus had detailed some personnel to the area to search for the couple.

This comes barely 24 hours after the body of a one-year-old child who drowned in a stream at Sawaba in the Asokore-Mampong Municipality, was found on Thursday afternoon after a frantic search.

Many parts of the Ashanti Region are currently flooded, following two days of heavy rains.

Many property have been destroyed, while officials of the NADMO work around the clock to assist those affected.