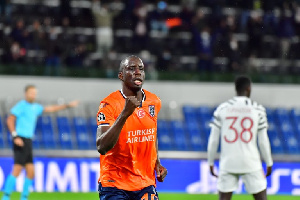 The Senegal international has been a free agent since April when he was released by Turkish Super Lig club Istanbul Basaksehir because of his lack of playing time.

Ba joins Nigeria goalkeeper Sebastian Osigwe at the Cornaredo Stadium and he is expected to strengthen the attacking options in Abel Braga’s side.

“FC Lugano is happy to announce the signing of the player Demba Ba until 30/06/2022,” the club announced.

After his second stint at Shanghai Shenhua, the 36-year-old returned to Turkey in January 2019 to join Basaksehir where he spent over two years.

He helped the Owls win their maiden Super Lig crown in the 2019-20 season.

The 2012-13 Uefa Europa League winner with Chelsea, also played for the Blues and Newcastle United in the Premier League where he registered 43 goals and three assists in 99 appearances.

Last month, Ba revealed he was ‘finding joy’ irrespective of club or country after he was released by Basaksehir.

“I just want to enjoy my football for the last couple of years and find joy again,” the Senegal striker said. “I would say there have been some things that have taken the joy of football away more or less over the last few years but I’m a lover of the game and want to finish on a very good note.

“England could be an option but I’m not stuck on one country, one division or league – I’m just waiting to see what will come.

“It may end in another league, another country but I will make the best decision for myself and my family.

“I would have loved to have two careers – one where I just traveled the world and visited countries, cultures and learnt about people because I love to do that.

“But then I would have loved another where I stayed at one club for 10, 12, 15 years because it’s special to do something like that.”

Christian Atsu confirms he will leave Europe next season