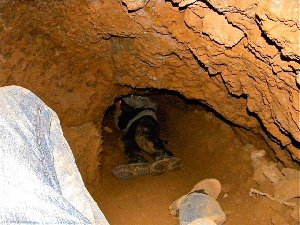 Two small-scale miners met their untimely death in a mine in Gbani-Obuasi in Talensi in the Upper East Region after a loose rock fell on them.

The two were part of a team of five small-scale miners who had gone underground on Thursday, June 17 to mine.

According to a police report, the loose rock suddenly fell on them crashing two instantly.

The bodies of Wahab Mahmud, 29, and Seidu Alhassan, 35, were retrieved and sent to Tongo District Hospital for preservation and autopsy.

Their bodies were identified by Tommie Wadud, a junior brother of Wahab, in the presence of police officers Eric Ahorvi and Wisdom Bansah.

After examination, medical officer Dr Benjamin Ayitah gave the cause of death as “severe head injury and polytrauma”, promising to come out with the full cause later.

The bodies have since been released to their families for interment.