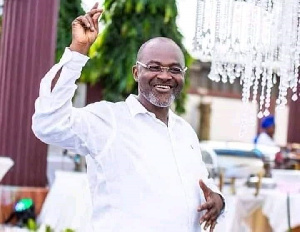 Ghana Cocoa Board (COCOBOD) has debunked allegations levelled against its officials of having been flown to Dubai to attend Assin Central Member of Parliament’s 61st birthday.

On Friday June 18, 2021, the Herald newspaper and its online portal published a story headlined “Ken Agyapong flies COCOBOD officials to Dubai for his birthday party” but a response from authorities of the board denied the claim describing the story as “erroneous”.

According to the COCOBOD, no official nor member of the Procurement has been sponsored to attend the said party, neither has its Chief Executive, Joseph Boahene Aidoo, travelled within the period of the celebration.

Read the full response to the publication below

The attention of Ghana Cocoa Board (COCOBOD) has been drawn to a headline story with the above-mentioned subject in the Friday 18th June, 2021 edition of the Herald Newspaper as well its online news portal.

COCOBOD wishes to correct the erroneous reports that some officials of the Board were sponsored by the Member of Parliament for Assin Central, Hon. Kennedy Ohene Agyapong to Dubai to attend his 61st birthday party.

We categorically deny that officials of the Board including some staff of the Procurement Department were sponsored to the said party.

Again, the Chief Executive whose picture was used alongside Hon. Ken Agyapong on the front page of the newspaper has been in Ghana, and at work at the time the supposed party took place.

We however wish to state clearly that, no party agent has been recruited to the procurement department as alleged by the Herald.

We urge the general public especially our cherished stakeholders to disregard the inaccurate information put out by the Herald which are all aimed at undermining the progress made by the Board in recent years.

Rock kills two in mine at Gbani in Upper East

Revealed: Presidential aircraft was in France but not used by Akufo-Addo