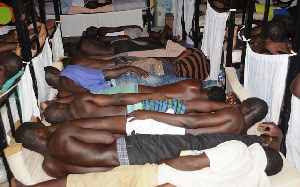 LISTEN TO THE AUDIO BELOW:

Prison officers have been accused of aiding and abetting inmates to perpetuate crime while in their custody.

An inmate, who spoke on Adom FM’s morning show, Dwaso Nsem programme Thursday, claimed inmates who engage in mobile money fraud do it with the tacit support of prison wardens.

The prisoner in detention at Ankaful Maximum Security Prison in Central Region revealed how some prison officers allegedly collected cash from an inmate who engaged in mobile money fraud.

He also claimed phones seized from inmates are sold in the open market by the prison officers.

He added that most of the inmates, including him, who have been incarcerated for over 14 years, are growing from bad to worst