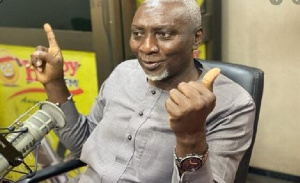 International Diplomatic Expert, Farouk Al-Wahab, says the bounty placed on the Jamestown bullion van robbers by the police is miserable and will achieve no results.

He noted that investigations into the robbery and the murder of the two may end abruptly because the robbers can compete with the amount the police has placed on them as bounty.

Comparing the bounties of other countries to that of Ghana, he stated that, “The bounty from the Ghana Police is not attractive. In the US, a bounty as high as US$25 million can be placed on just one criminal so how can Ghana Police just place GHc20,000 on the heads of these robbers? They will not achieve any results, it is a joke. How can someone kill a police officer for the police to place such a small sum on their heads as bounty?”

Farouk Al-Wahab made this known in an interview with Happy98.9FM’s Don Kwabena Prah on the Epa Hoa Daben Political talk show.

The Ghana Police Service has placed a bounty of ¢20,000 on gunmen who shot to death a police officer and an eyewitness, during a robbery incident involving a bullion van at Adedenkpo, a suburb of Jamestown in Accra on Monday.

The Director of Public Affairs for the police, Supt. Sheilla Kessie Abayie-Buckman stated that although they are working earnestly to apprehend the criminals, they are calling on the general public to give information that would lead to the arrest of the culprits to receive the reward. And assured the informant’s identity will be held in confidence.