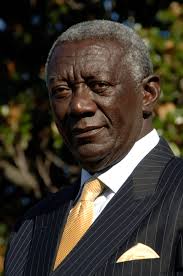 • The former president insists no government possesses a magic wand that could automatically fix Ghana’s economy.

• He has advised Ghanaians to re-analyse the #FixTheCountry agenda

• Mr. Kufuor says Ghana is currently suffering from some poor and hasty decisions by some past leaders

Former President John Agyekum Kufuor has asked those championing the #FixTheCountry agenda to desist from pretending as though the country was in its rightful shape and a particular government came to destroy it.

To him, no government possesses a magic wand that could easily transform the economy and as such the #FixTheCountry agenda should be revisited and revised.

Mr. Kufuor in an interview on Kofi TV said Ghana is still depending on the same resources it had 64 years ago which makes it difficult because the country’s population keeps expanding.

“When did we finish fixing the nation that all of a sudden we are acting as through it was once fixed and someone destroy it? We are still building it. Ghanaians are a lot. When we had independence in 1957, we were only 6 million.

“As I speak now, I believe we are almost 40 million. When we add all those that have travelled. We are only 64 years. The land on which we live hasn’t expanded. Our natural resources haven’t multiplied,” he told Kofi Adomah.

He said the country is currently suffering from its decision to introduce certain foreign culture and practices without subjecting it to proper scrutiny first.

“We are a developing country. We have leadership challenges and we are still making use of the little we have. All the challenges we currently have are because we rushed to make some hasty decisions. At a point, we did not live within our means. We didn’t plan properly.

“We adopted certain foreign culture and ideologies that we didn’t study well enough. We didn’t understand yet we adopted them. We should stop saying fix the country as though there is a magic wand we could just cast and everything will be better,” he established.

Source: www.ghanaweb.com
Related Topics:actingASFIXGhanaIFstopWAS
Up Next