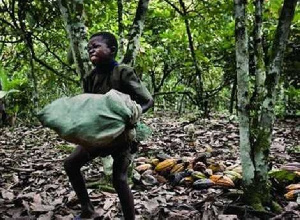 The European Union (EU) has said it does not intend to place a ban on the purchase of cocoa from Ghana because of child labor claims.

Rather, the EU is working closely with the Ministry of Employment and Labor Relations, the Ghana Cocoa Board (COCOBOD), among other stakeholders, to agree on the proper definition of child labour.

According to the Head of the EU Delegation in Ghana, Mrs. Diana Acconcia, “the issue of child labor is complicated, but we are working very well together to come to a common understanding to see what we can do to make cocoa more sustainable”.

Mrs. Acconcia, who gave the assurance when she called on the Council of State in Accra yesterday, added that the EU was open to further discussions on the subject.

The visit was to open a channel of conversation with the council on issues of mutual cooperation.

The EU is the world’s largest importer of cocoa, accounting for 60 per cent of imports.

Under its Green deal and “Zero tolerance” approach to child labor, the union has engaged Côte d’Ivoire and Ghana, the two biggest producers of cocoa, on deforestation and alleged child labor on cocoa farms.

On the COVID-19 pandemic, Mrs. Acconcia said Ghana was a priority country to benefit from the COVAX vaccine supply should the EU take a definite decision to donate the vaccine to countries in need of it.

She said the union was currently deliberating on the modalities, after which a decision would be taken on countries to which to donate the vaccine, in line with the COVAX arrangement.

The EU Envoy commended the government for the effort in containing the pandemic, saying the EU recognized Ghana’s democratic credentials, and that it was counting on Ghana to play a lead role in helping to deal with the crisis in the sub-region.

The Chairman of the Council of State, Nana Otuo Siriboe, thanked the EU for its support to the country, including a loan to establish a development bank and for clearing the country from the union’s money laundering sanctions.

He said the issue of child labor needed to be put into proper context, in line with the country’s traditional practices.

Nana Siriboe said as part of the effort by the government to get the youth engaged for a living, it had introduced a number of initiatives, such as the mass spraying of cocoa farms.

“There is also the capitation grant, among other interventions, to empower farmers to support their children in school,” he added.

He, therefore, urged Mrs. Acconcia to allay the fears of the members states of the EU for them to continue patronizing cocoa from Ghana.

On the COVID-19 vaccine, Nana Siriboe said consideration should be given to developing countries to help prevent another wave of infections.

He later presented copies of a report on the stewardship of the seventh Council of State to Mrs. Acconcia.

She reciprocated with some books on the activities of the EU Delegation.