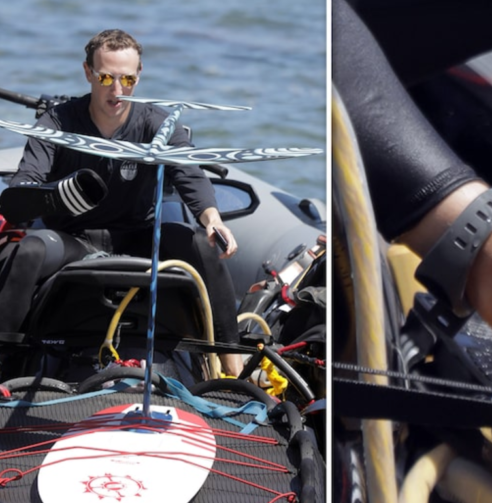 The owner of Facebook, Mark Zuckerberg, is not taking any chances sharing the ocean with sharks.

In a latest video which has hit the internet he’s hooked himself up to a contraption that supposedly keeps them at bay.

Mark was out on his hydrofoil surfboard in Kauai, Hawaii Thursday, wearing an ankle bracelet called Sharkbanz.

The promise is that sharks don’t like what it emits, so they stay clear of surfers. The device sends out an electrical current that apparently drives sharks away.

But, there are other, more subtle deterrents.

His board has a zebra pattern underneath and the theory goes that sharks like seeing solid colours because it resembles food, so they’re not into stripes – which many believe is a good theory, but sounds a little sketchy.

Zuck posted video of him on the board, and he’s really good in the water.

It’s pretty choppy, but Mark stays up and bounces atop the swells. Report has it that he’s been surfing for years.

Related Topics:FACEBOOK CEO
Up Next